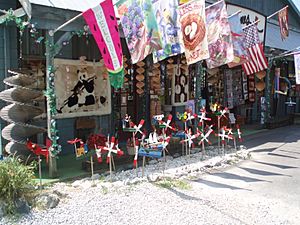 A whirligig is an object that spins or whirls, or has at least one part that spins or whirls. A whirligig can also be a pinwheel, buzzer, comic weather-vane, gee-haw, spinner, whirlygig, whirlijig, whirlyjig, whirlybird, or simply a whirly. Whirligigs are most commonly powered by the wind but can be hand, friction, or motor powered. They can be used as a kinetic garden ornament. They can also be designed to transmit sound and vibration into the ground to repel burrowing rodents in yards.

Whirligigs can be divided into four categories: button, friction, string and wind-driven. 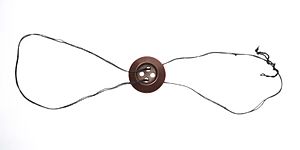 A traditional button whirligig from Ukraine—called a фуркалка "furkalka" due to the sound made from spinning.

Button whirligigs, also known as button spinners and buzzers, are the oldest known whirligigs. They require only a piece of clay or bone and a strip of hide. Native American cultures had their own version of this toy in 500 BC. Many a child of the Great Depression from the southern Appalachians and Ozarks remembers a button or token, or coin and a string as the primary spinning toy of their youth.

Buzzers are button whirligigs that make a sound which can be modulated by how quickly the button is spinning and by the tightness of the string. A buzzer is often constructed by running string through two of the holes on a large button and is a common and easily made toy.

A buzzer (buzz, bullroarer, button-on-a-string) is an ancient mechanical device used for ceremonial purposes and as a toy. It is constructed by centering an object at the midpoint of a cord or thong and winding the cord while holding the ends stationary. The object is whirled by alternately pulling and releasing the tension on the cord. The whirling object makes a buzzing or humming sound, giving the device its common name.

American Natives used the buzzer as a toy and, also ceremonially, as to call up the wind. Early Indian buzzers were constructed of wood, bone, or stone, and date from at least the Fourche Maline Culture, c. 500 B.C. 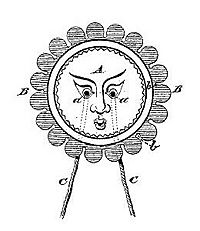 String-powered whirligigs require the operator to wrap the string around a shaft and then pull the string to cause the whirligig's motion. String whirligigs have ancient origins. The bamboo-copter or bamboo butterfly was invented in China in 400 BC. While the initial invention did not use string to launch a propeller, later Chinese versions did. The first known depictions of whirligigs are string-powered versions in tapestries from medieval times.

Friction whirligigs, also called gee-haws, depend on the holder rubbing a stick against a notched shaft resulting in a propeller at the end of the shaft turning, largely as the result of the vibration carried along the shaft. The motion needed to power a friction whirligig is very similar to rubbing sticks together to create fire. Friction whirligigs are another staple of craft shops and souvenir stores in the Appalachian Mountains. 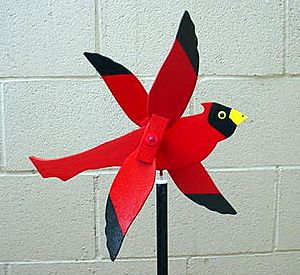 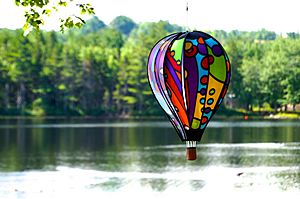 Wind-driven whirligig at a lake in Nova Scotia, Canada

A wind-driven whirligig transfers the energy of the wind into either a simple release of kinetic energy through rotation or a more complicated transfer of rotational energy to power a simple or complicated mechanism that produces repetitive motions and/or creates sounds. The wind simply pushes on the whirligig turning one part of it and it then uses inertia.

The simplest and most common example of a wind-driven whirligig is the pinwheel. The pinwheel demonstrates the most important aspect of a whirligig, blade surface. Pinwheels have a large cupped surface area which allows the pinwheel to reach its terminal speed fairly quickly at low wind speed.

Increasing the blade area of the whirligig increases the surface area so more air particles collide with the whirligig. This causes the drag force to reach its maximum value and the whirligig to reach its terminal speed in less time. Conversely the terminal speed is smaller when thin or short blades with a smaller surface area are utilized, resulting in the need for a higher wind speed to start and operate the whirligig. Whirligigs come in a range of sizes and configurations, bounded only by human ingenuity. The two blade non-mechanical model is the most prevalent, exemplified by the classic Cardinal with Wings illustrated at right.

All content from Kiddle encyclopedia articles (including the article images and facts) can be freely used under Attribution-ShareAlike license, unless stated otherwise. Cite this article:
Whirligig Facts for Kids. Kiddle Encyclopedia.