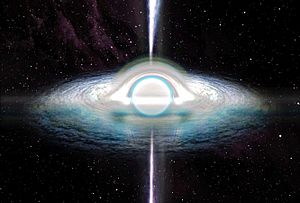 Artistic recreation of a white hole

A white hole is a hypothetical region of spacetime which nothing can enter from the outside, although energy-matter, light and information can escape from it.

It is the reverse of a black hole, which can be entered only from the outside and from which energy-matter, light and information cannot escape.

Unlike black holes, white holes cannot be continuously observed; rather, their effects can be detected only around the event itself.

Supermassive black holes (SBHs) are predicted to be at the center of every galaxy and that possibly, a galaxy cannot form without one.

Stephen Hawking proposed that these SBHs spawn a supermassive white hole/Big Bang. It's like Newton's third law of motion, it states that for every action in nature there is an equal and opposite reaction.

A 2012 paper argues that the Big Bang itself is a white hole.

In 2014, the idea of the Big Bang being produced by a supermassive white hole explosion was explored in the framework of a five dimensional vacuum.

The theories about white holes haven't been proven yet.

All content from Kiddle encyclopedia articles (including the article images and facts) can be freely used under Attribution-ShareAlike license, unless stated otherwise. Cite this article:
White hole Facts for Kids. Kiddle Encyclopedia.