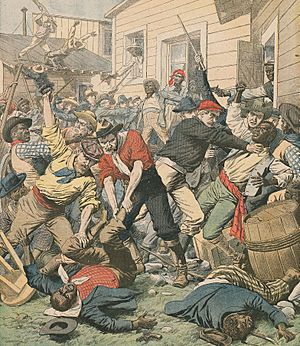 Whitecapping is the crime of threatening a person with violence. It was a violent lawless movement among white farmers towards black people that occurred specifically in the United States during the late 19th and early 20th centuries.

States passed laws against it, but whitecapping continued into the early 20th century.

Whitecapping was associated historically with such groups as The Night Riders, Bald Knobbers and the Ku Klux Klan.

All content from Kiddle encyclopedia articles (including the article images and facts) can be freely used under Attribution-ShareAlike license, unless stated otherwise. Cite this article:
Whitecapping Facts for Kids. Kiddle Encyclopedia.