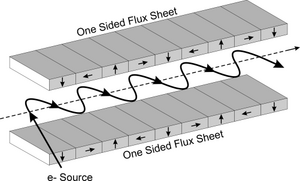 Schematic diagram of a free-electron laser

A wiggler is an insertion device in a synchrotron. It is a series of magnets designed to repeatedly laterally deflect ('wiggle') a beam of charged particles inside a storage ring of a synchrotron. These deflections release synchrotron radiation. Although synchrotrons give off such radiation anyway as magnets work to bend the particles on a circle-like path, a wiggler release more intense radiation than the bending magnets.

A wiggler has a broader spectrum of radiation than an undulator. In a wiggler, the period and the strength of the magnetic field is not tuned to the frequency of radiation produced by the electrons. So, every electron in the electron bunch radiates independently. This makes a broad radiation spectrum. A wiggler can be considered to be series of bending magnets stuck together, and its radiation intensity goes up as the number of magnetic poles in the wiggler goes up.

Typically the magnets in a wiggler are arranged in a Halbach array. The design shown above is usually known as a Halbach wiggler.

All content from Kiddle encyclopedia articles (including the article images and facts) can be freely used under Attribution-ShareAlike license, unless stated otherwise. Cite this article:
Wiggler (synchrotron) Facts for Kids. Kiddle Encyclopedia.