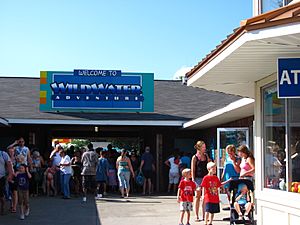 WildWater Adventure opened in 1990. The park carried out an extensive phase in 1997 and added the Snake Pit slide complex, the Mine Shaft family raft ride, two wave pools, and a children's play area. When Cedar Fair purchased the park from Roger Jourden they added cabanas to two of the wave pools and in 2005 added the Funnel of Fear tornado slide. In 2010, Michigan's Adventure announced over Facebook that a new attraction would be added to WildWater Adventure called Beach Party. Following the construction of Beach Party, Wild Water Adventure received a small overhaul in 2017. The children's area Half Pint Paradise was remodeled to include a splash pad and now connected the two halves of the waterpark. The entrance to the Funnel of Fear was moved from the back end of the waterpark to the front.

WildWater Adventure offers a wide variety of water attractions for all guests to enjoy. These attractions include:

All content from Kiddle encyclopedia articles (including the article images and facts) can be freely used under Attribution-ShareAlike license, unless stated otherwise. Cite this article:
WildWater Adventure Facts for Kids. Kiddle Encyclopedia.