The William J. Braitsch and Company Plant is a historic industrial building at 472 Potters Avenue in Providence, Rhode Island. Built in 1892, it played a key role in the development of the silversmithing industry in the city. It was listed on the National Register of Historic Places in 2016. 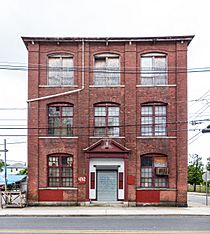 The Braitsch Company Plant is located in Providence's Elmwood residential neighborhood, at the southeast corner of Potters Avenue and Melrose Street. The principal building of the plant is a three-story masonry building, built out of brick with stone trim. Decorative features include segmented-arched windows set in recessed panels, with brick pilastered piers rising to a projecting cornice. It has a shallow pitch gabled roof covered by membrane. The interior has slow-burning timber frame construction with heavy plank flooring, the frame and floor both having been reinforced by steel in some places. Attached to the main building's east side is a smaller boiler house, and there is on the property a freestanding concrete block "dry cleaning room" that is of mid-20th century construction.

William J. Braitsch was a native of New York City who apprenticed at the studio of Louis Comfort Tiffany in the jewelry trade. He and a partner, John Hearn, moved to Providence in 1887, where they opened a shop from which they manufactured heads for walking canes. Hearn & Braitsch built this plant as a manufacturing facility in 1892, but was dissolved the following year and operated exclusively thereafter by Braitsch. The building was designed by George W. Cady and built by N. B. Horton. His business suffered due to the depression years of the 1890s, and eventually closed in 1915. As his business declined, Braitsch leased floor space in the facility to other manufacturers, mainly also in the jewelry business, and the building was taken over in its entirety by what became known as the Colonial Laundry in 1915. The business operated here until 1965, when it was readapted for jewelry manufacture. Since 1987 it has seen low-level uses such as storage.

All content from Kiddle encyclopedia articles (including the article images and facts) can be freely used under Attribution-ShareAlike license, unless stated otherwise. Cite this article:
William J. Braitsch and Company Plant Facts for Kids. Kiddle Encyclopedia.