William Land Park, frequently referred to as simply "Land Park" is a major city park in Sacramento, California. The park is located between Interstate 5 and State Route 160. 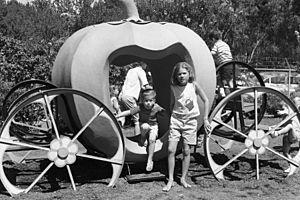 There are several city attractions located within the park including:

"Land Park" can also refer to the surrounding neighborhood.

All content from Kiddle encyclopedia articles (including the article images and facts) can be freely used under Attribution-ShareAlike license, unless stated otherwise. Cite this article:
William Land Park Facts for Kids. Kiddle Encyclopedia.