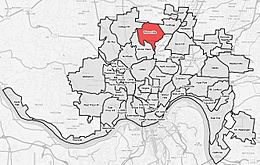 Winton Hills is a neighborhood of Cincinnati, Ohio.

Winton Hills is a neighborhood in Cincinnati, Ohio.

Winton Hills is an area in between Northside, College Hill, Winton Place and Carthage. Winton Terrace takes up most of the area's space. Winton Terrace is a Cincinnati Metropolitan Housing Authority (CMHA) project built for low income Cincinnati citizens. It was the first housing project in Cincinnati. It opened in 1940 as white only and did not take African American families. African Americans were not allowed until the late 1950s, but only because CMHA had built another white only project next door to Winton Terrace, named Findlater Gardens. Because it is so close, people rarely call the projects Findlater Gardens; many people still considered the projects to be Winton Terrace.

Findlater Gardens being a whites only project did not last very long, just a few years. In 1965, Winton Terrace was 95% African American.

All content from Kiddle encyclopedia articles (including the article images and facts) can be freely used under Attribution-ShareAlike license, unless stated otherwise. Cite this article:
Winton Hills, Cincinnati Facts for Kids. Kiddle Encyclopedia.