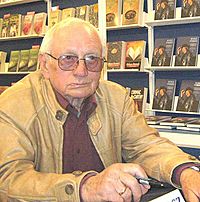 He was best known as Lucjan Mostowiak in Polish TV series "M jak miłość", as Pyzdra in "Janosik", as Wichura in "Czterej pancerni i pies" and as Balcerek in "Alternatywy 4".

In 1974, Pyrkosz was decorated with the Gold Cross of Merit and in 1984, with the Knight's Cross of Polonia Restituta. In 2009, he received the Medal for Merit to Culture – Gloria Artis.

Pyrkosz died on 22 April 2017 in Warsaw from complications of Alzheimer's disease, aged 90.

All content from Kiddle encyclopedia articles (including the article images and facts) can be freely used under Attribution-ShareAlike license, unless stated otherwise. Cite this article:
Witold Pyrkosz Facts for Kids. Kiddle Encyclopedia.