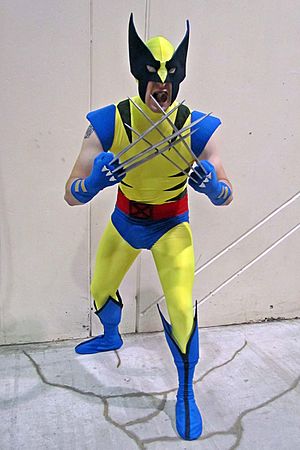 A cosplayer dressed up as Wolverine.

Wolverine (birth name James Howlett; alias Logan and Weapon X) is a fictional character which is today one of the most famous superhero character. He is create by Len Wein, Roy Thomas and John Romita Sr..

All content from Kiddle encyclopedia articles (including the article images and facts) can be freely used under Attribution-ShareAlike license, unless stated otherwise. Cite this article:
Wolverine (character) Facts for Kids. Kiddle Encyclopedia.