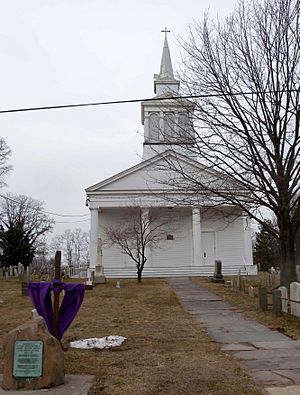 Woodrow is a name increasingly applied to the western part of Huguenot, a neighborhood located on the South Shore of Staten Island, New York, United States. The neighborhood is represented in the New York City Council by Joe Borelli.

The first Methodist church in the immediate New York City area opened in the neighborhood in 1771. Known today as the Woodrow United Methodist Church, its original congregants included some of the island's earliest well-known families. It was listed on the National Register of Historic Places in 1982.

Long regarded as the western part of Huguenot pursuant to the custom of old-time Staten Islanders of naming a particular East Shore or South Shore neighborhood after the nearest station on the Staten Island Railway. The Prince's Bay post office is actually located in Woodrow, as well as I.S. 75.

Highways/Major Roads in Woodrow: Roads accessed in Woodrow could be the Korean War Veterans Pkwy corner of Arden Ave or the West Shore Expwy (NY 440)

All content from Kiddle encyclopedia articles (including the article images and facts) can be freely used under Attribution-ShareAlike license, unless stated otherwise. Cite this article:
Woodrow, Staten Island Facts for Kids. Kiddle Encyclopedia.