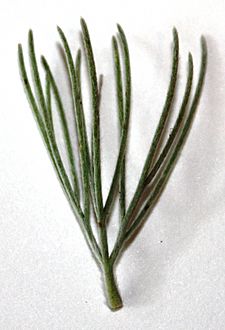 A single leaf of A. sericeus, showing the characters that give rise to the common name woollybush. 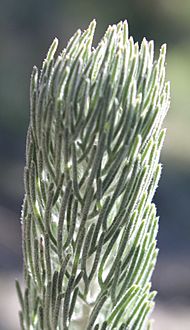 Closeup of a branch tip of A. cygnorum.

Woollybush, woolly bush or woolly-bush is a common name for plants of the genus Adenanthos with leaves deeply divided into long, soft, slender laciniae, often covered in a fine down of soft hairs. These properties give the leaves a soft, silky feel, in stark contrast to the sclerophyllous plants that dominate both its geographic range (southern Australia) and its taxonomic family (Proteaceae). This softness accounts for the common name.

Ernest Charles Nelson states that the name has been in use for a long time, and believes that it originated in the vicinity of Albany, Western Australia.

All content from Kiddle encyclopedia articles (including the article images and facts) can be freely used under Attribution-ShareAlike license, unless stated otherwise. Cite this article:
Woollybush Facts for Kids. Kiddle Encyclopedia.