Eucalyptus longifolia, commonly known as woollybutt, is a species of medium-sized tree that is endemic to eastern Australia. It has thick, fibrous bark on the trunk and larger branches, lance-shaped to curved adult leaves, flower buds in groups of three, white flowers and cup-shaped to cylindrical or hemispherical fruit. The drooping flower heads in groups of three are a distinguishing feature. It grows in heavy soils often near water. 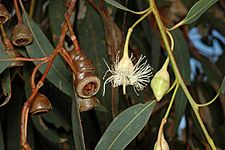 Within the genus Eucalyptus, this species belongs in the subgenus Symphyomyrtus.

The range of woollybutt is from Morisett in central New South Wales south to the Victorian border. In the north of its range it is more scattered in its distribution, but becomes more common south of Nowra to Bega. It generally grows on clay soils and floodplains, sometimes in areas with poor drainage, in valleys and low areas. In open sclerophyll forest, it grows alongside such trees as white mahogany (E. acmenoides), grey box (E. moluccana), forest red gum (E. tereticornis), and rough-barked apple (Angophora floribunda), while in swampy areas it is found with swamp mahogany (E. robusta) and paperbark species such as snow-in-summer (Melaleuca linariifolia), prickly paperbark (M. styphelioides) and swamp paperbark (M. ericifolia).

The woollylbutt can regenerate via epicormic buds if its crown is damaged by bushfire. Trees live for over a hundred years. Along with many bird species the grey-headed flying fox (Pteropus poliocephalus) and little red flying fox (P. scapulatus) feed on nectar produced by the woollybutt flowers.

The dark red timber is hard and resistant to water, and termites. It has been used in railway sleepers and other general construction. The woollybutt is also important in beekeeping and the honey industry. It is useful as a shade tree or windbreak in paddocks, but grows too large for the average garden. 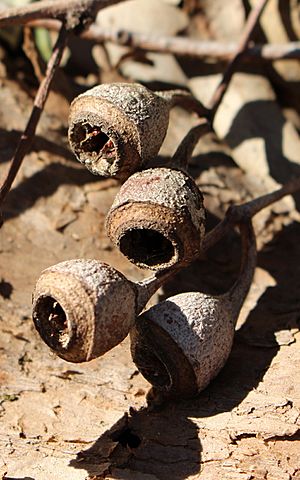 All content from Kiddle encyclopedia articles (including the article images and facts) can be freely used under Attribution-ShareAlike license, unless stated otherwise. Cite this article:
Woollybutt Facts for Kids. Kiddle Encyclopedia.