Yanka Kupala (July 7 [O.S. June 25] 1882 – June 28, 1942) was the pen name of Ivan Daminikavich Lutsevich. He was a Belarusian poet and writer. Kupala is said to be one of the greatest Belarusian-language writers of the 20th century.

Kupala was born on July 7, 1882 in Viazynka. His family was of Szlachta origins. Both of his parents were tenant farmers. Kupala received a traditional Belarusian education. He finished his studies in 1898. After the death of his father in 1902, Kupala worked several short-term jobs. These included being a tutor, a shop assistant, and a record keeper.

Kupala's first serious try at writing was Ziarno. It was a Polish-language sentimental poem which he completed around 1903–1904. His first Belarusian-language work ("Мая доля") was dated July 15, 1904. Kupala's first published poem, "Мужык" ("Peasant"), was published about a year later. It was in the newspaper on May 11, 1905. Several more poems by Kupala were in the Belarusian-language newspaper Nasha Niva from 1906 to 1907.

In Vilnius and St. Petersburg 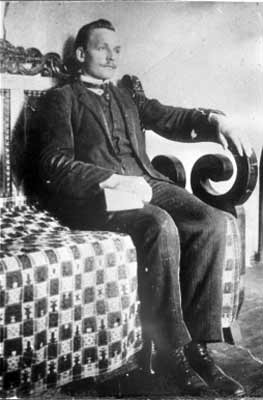 Yanka Kupala during his study under a professor A. Charniaev in Saint Petersburg, 1909

Kupala moved from Belarus to Vilnius in 1908. He continued with his career as a poet. The first published collection of his poems, Жалейка (The Little Flute) made the czarist government mad. The order for Kupala's arrest was ended in 1909.

Kupala left for St. Petersburg in 1909. In 1910 he published several works. He left St. Petersburg and returned to Vilnius in 1913. Among those influencing Kupala in the 1910s was Maxim Gorky.

During the Soviet period

Kupala's writing changed to an optimistic tone after the Great October Revolution of 1917.

Kupala was awarded the Order of Lenin in 1941 for the poetry collection Ад сэрца (From the Heart).

In 1941 he moved to Moscow and then to Tatarstan. But even from there he wrote poems supporting Belarus fighting against Nazi Germany. He died mysteriously in 1942 in Moscow. He fell down the stairwell in Hotel Moskva. The death was said to be accidental.

All content from Kiddle encyclopedia articles (including the article images and facts) can be freely used under Attribution-ShareAlike license, unless stated otherwise. Cite this article:
Yanka Kupala Facts for Kids. Kiddle Encyclopedia.