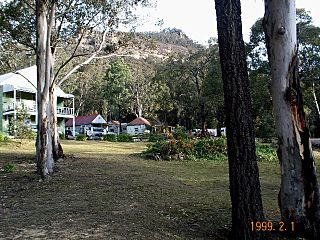 Yerranderie was formerly a silver mining town of 2000 people, but the mining industry collapsed in 1927, and the town was cut off from direct access from Sydney by the establishment of the Warragamba Dam and Lake Burragorang in 1959. The Yerranderie Post Office opened on 1 November 1899 and closed in 1958.

The town is now divided into two sections, the residential township adjacent to a private airstrip and the historic site one kilometre further west. The area is surrounded by abandoned mine shafts and mining relics. Accessible mainly by dirt road from Oberon, New South Wales 70 km to the west; another route passes through Oakdale, New South Wales to the east, but that road is closed to public access as it passes through a water catchment area. Aircraft also occasionally fly out from Camden Airport. The township was established on the slopes north of Yerranderrie Peak, which is the remains of a volcanic dyke and the source of the mineral wealth of the area. The name of Yerranderrie is taken from two local Aboriginal words meaning slope and summit.

Yerranderie was caught up in the longest strike in Australian history, which is still unbeaten today

The town was eventually bought by Valerie Anne Lhuede, who developed it as a tourist centre and total environment project. The old post office is now known as The Lodge and serves as a guest house. Other restored buildings include two miners cottages as well as several shops. The caretakers live in Krubi Cottage nearby.

In March 2011, Val Lhuedé announced, "I am donating Yerranderie to the National Parks and Wildlife Service with a list of my wishes for Yerranderie’s future."

All content from Kiddle encyclopedia articles (including the article images and facts) can be freely used under Attribution-ShareAlike license, unless stated otherwise. Cite this article:
Yerranderie Facts for Kids. Kiddle Encyclopedia.