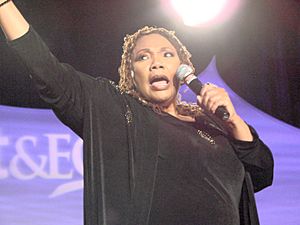 Yolanda's father was killed when she was only 12 years old. On April 4, 1968, the day that he was killed, her mother got a phone call from Jesse Jackson. Yolanda was the only one of her four brothers and sisters to realize that their father had been killed. She went to his funeral and tried to act like her mother after that. She graduated from her high school when she was 16 years old.

She got bullied when she went to Smith College because she was her father's daughter, and did not know how to deal with the issue. She got over the bullying by reading his books and started thinking he was correct on his views when he was alive. After finishing her first year at the college, she went back home and at that point her grandmother Alberta Williams King was shot and killed.

She died on May 15, 2007 after talking to her brother Dexter and falling in his home due to a heart disease.

All content from Kiddle encyclopedia articles (including the article images and facts) can be freely used under Attribution-ShareAlike license, unless stated otherwise. Cite this article:
Yolanda Denise King Facts for Kids. Kiddle Encyclopedia.