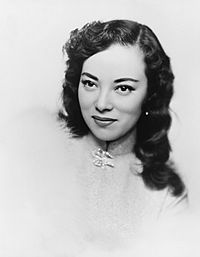 Yoshiko Ōtaka (大鷹 淑子, Ōtaka Yoshiko) (12 February 1920 – 7 September 2014), widely known by her Chinese name Li Xianglan (Li Hsiang-lan) and English stage name Shirley Yamaguchi, was a Chinese-born Japanese actress and singer. She was elected as a member of the Japanese Diet in the 1970s and served for 18 years. Ōtaka was known for her role in Eternity. She was born in Fushun, Manchuria.

Ōtaka died at the age of 94 in Tokyo, Japan from heart failure.

All content from Kiddle encyclopedia articles (including the article images and facts) can be freely used under Attribution-ShareAlike license, unless stated otherwise. Cite this article:
Yoshiko Ōtaka Facts for Kids. Kiddle Encyclopedia.