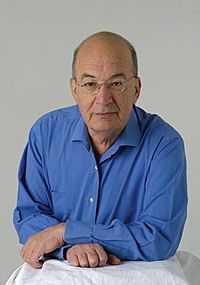 Yossi Sarid (Hebrew: יֹוסֶף "יֹוסִי" שָׂרִיד‎; 24 October 1940 – 4 December 2015) was an Israeli news commentator and former politician. He served as a member of the Knesset for the Alignment, Ratz and Meretz between 1974 and 2006. He was the Minister of Education and Minister of the Environment, he led Meretz between 1996 and 2003 and served as Leader of the Opposition from 2001 to 2003.

He wrote a column for Haaretz.

Sarid was born in Rehovot and died on the evening of 4 December 2015 from a heart attack, aged 75.

All content from Kiddle encyclopedia articles (including the article images and facts) can be freely used under Attribution-ShareAlike license, unless stated otherwise. Cite this article:
Yossi Sarid Facts for Kids. Kiddle Encyclopedia.