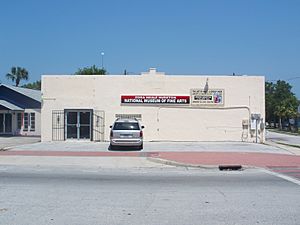 The Zora Neale Hurston National Museum of Fine Arts, also known as The Hurston, is an art museum in Eatonville, Florida. The Hurston is named after Zora Neale Hurston, an African-American writer, folklore, and anthropologist who moved to Eatonville at a young age and whose father became mayor of Eatonville in 1897. "Its mission is to provide a place "in the heart of the community" where the public can view the work of artists of African descent, who live on the Continent and/or in the Diaspora".

The museum contains information concerning the history of Eatonville, and its artistic displays are centered on individuals of African descent, from the diaspora and the United States. The Hurston features exhibitions quarterly to highlight emerging artists. There are gallery talks provided during the exhibitions which can include artists, the curator, or a guest scholar. The museum not only supports the art involved within the museum but also supports the Zora Neale Hurston Trail which contains 16 historic artists and 10 markers written by Hurston. The museum does not charge an admission but appreciate donations. It is also featured in the Zora Festival, which is held every year to celebrate the history, culture, and arts of Eatonville. For the improvement of the museum, grants have been awarded to the Hurston. The Retrospective Exhibition involved in the Hurston was featured at Pennsylvania State University at the HUB-Robeson Galleries.

Established in 1990, the museum shows artworks of African-American artists and other artists from the African Diaspora. The Hurston is sponsored by the Association to Preserve the Eatonville Community, Inc. (P.E.C.), which continues the history and culture of Eatonville. It has developed partnerships with the Orlando Museum of Fine Arts and the Cornell Fine Arts Museum program at Rollins College. The museum is located at 227 East Kennedy Boulevard.

The P.E.C. stands for Pride of heritage, Educational excellence, and Cultural arts. It is an organization to continuously improve the city of Eatonville and expand the knowledge to create Eatonville to be a tourism destination. Their mission is:

The P.E.C. is involved in the education, health, heritage, history, and economic development of Eatonville. Programs like the Zora Festival, ZORA! STEMinitiative, E-WE Lab, and the Yards and Gardens Club are created by the P.E.C. for the continuing knowledge involved in Eatonville. Partners like National Center for Simulation, Valencia Community College, Orlando Science Center, UCF College of Medicine, UCF College of Arts & Humanities, Orange County Public School, and more are involved in these programs. The association continues to create and execute plans like fundraising, advancing education, and advancing farming to improve Eatonville's community.

All content from Kiddle encyclopedia articles (including the article images and facts) can be freely used under Attribution-ShareAlike license, unless stated otherwise. Cite this article:
Zora Neale Hurston Museum of Fine Arts Facts for Kids. Kiddle Encyclopedia.