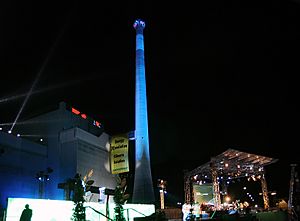 Zwentendorf Nuclear Power Plant during Save the World Awards ceremony 2009.

Today, the plant is used to get replacement parts to other plants of the same type (mainly in Germany), and for staff training. It is not possible to visit the power plant. Because the nuclear power plant was never in use, a coal power plant was built in 1987 to replace it.

The plant is now owned by Austrian energy company and used as a Solar Power Plant.

All content from Kiddle encyclopedia articles (including the article images and facts) can be freely used under Attribution-ShareAlike license, unless stated otherwise. Cite this article:
Zwentendorf power plant Facts for Kids. Kiddle Encyclopedia.