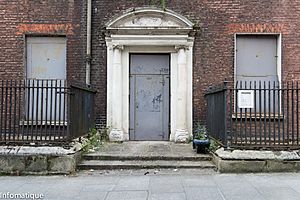 Entrance to 14 Henrietta Street in August 2011 (before restoration)

After the Act of Union in 1800, Dublin entered a period of economic decline. 14 Henrietta Street was occupied by lawyers, courts and a barracks during the 19th century. By 1877, a landlord called Thomas Vance had removed its grand staircase and divided it into 19 tenement flats of one, three and four rooms. An advert in The Irish Times from 1877 read: "To be let to respectable families in a large house, Northside, recently papered, painted and filled up with every modern sanitary improvement, gas and wc on landings, Vartry Water, drying yard and a range with oven for each tenant; a large coachhouse, or workshop with apartments, to be let at the rere. Apply to the caretaker, 14 Henrietta St." By 1911, it was home to over 100 people. The last families left the house in 1979.

Restoration work began in 2006 and took over ten years to complete. 14 Henrietta Street is owned and was restored by Dublin City Council, but is operated by the Dublin City Council Culture Company. The house has been restored to show the original Georgian period through to its final incarnation as a tenement.

All content from Kiddle encyclopedia articles (including the article images and facts) can be freely used under Attribution-ShareAlike license, unless stated otherwise. Cite this article:
14 Henrietta Street Facts for Kids. Kiddle Encyclopedia.