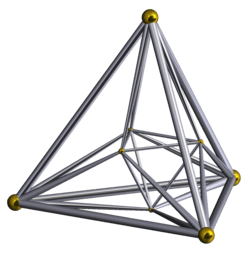 Conway calls it an orthoplex for orthant complex, as well as the entire class of cross-polytopes.

The hexadecachoron is a member of the family of polytopes called the cross-polytopes, which exist in all dimensions. As such, its dual polychoron is the tesseract (the 4-dimensional hypercube).

It is bounded by 16 cells, all of which are regular tetrahedra. It has 32 triangular faces, 24 edges, and 8 vertices. The 24 edges bound 6 squares lying in the 6 coordinate planes.

There is a lower symmetry form of the 16-cell, called a demitesseract or 4-demicube, a member of the demihypercube family, and represented by h{4,3,3}, and can be drawn bicolored with alternating tetrahedral cells.

The cell-first parallel projection of the 16-cell into 3-space has a cubical envelope. The closest and farthest cells are projected to inscribed tetrahedra within the cube, corresponding with the two possible ways to inscribe a regular tetrahedron in a cube. Surrounding each of these tetrahedra are 4 other (non-regular) tetrahedral volumes that are the images of the 4 surrounding tetrahedral cells, filling up the space between the inscribed tetrahedron and the cube. The remaining 6 cells are projected onto the square faces of the cube. In this projection of the 16-cell, all its edges lie on the faces of the cubical envelope.

The vertex-first parallel projection of the 16-cell into 3-space has an octahedral envelope. This octahedron can be divided into 8 tetrahedral volumes, by cutting along the coordinate planes. Each of these volumes is the image of a pair of cells in the 16-cell. The closest vertex of the 16-cell to the viewer projects onto the center of the octahedron.

All content from Kiddle encyclopedia articles (including the article images and facts) can be freely used under Attribution-ShareAlike license, unless stated otherwise. Cite this article:
16-cell Facts for Kids. Kiddle Encyclopedia.