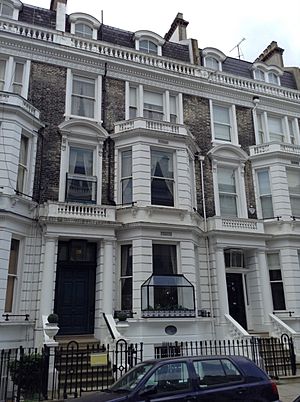 18 Stafford Terrace, formerly known as Linley Sambourne House, was the home of the Punch illustrator Edward Linley Sambourne (1844–1910) in Kensington, London. The house, now Grade II* listed, is currently open to the public as a museum.

18 Stafford Terrace was an almost new townhouse when the Sambournes moved in, in 1875. It was Linley Sambourne who set about re-decorating the house in the Aesthetic style. Today the house is a fine example of middle-class Aestheticism; its influences can still be seen permeating throughout the house, from decorative Sunflower motifs in the stained glass windows to the fine selection of William Morris wallpapers that hang within the rooms through to the displayed collection of blue-and-white Chinese import porcelain.

Linley Sambourne died in 1910 but it wasn't until his wife Marion's death four years later that the house passed to their bachelor son Roy. Roy kept the house's interior largely unchanged until his own death in 1946. The house then passed to Roy's sister Maud Messel. Maud already had a large London residence therefore 18 Stafford remained mostly unoccupied and unchanged. In the years leading up to Maud's death in 1960, the house had become increasingly fascinating to her daughter Anne, Countess of Rosse. This fascination led to Anne proposing the foundation of the Victorian Society in 1957, and in turn the continued preservation of the house largely as it had been lived in by Linley.

The archive is made up of personal papers relating to Edward Linley Sambourne, members of his family and their home at 18 Stafford Terrace. Dating from 1815 to the present day it includes diaries, letters, legal and financial papers, photographs and ephemera which give insights into both Sambourne's professional and middle-class family life in the later Victorian/Edwardian period.

All content from Kiddle encyclopedia articles (including the article images and facts) can be freely used under Attribution-ShareAlike license, unless stated otherwise. Cite this article:
18 Stafford Terrace Facts for Kids. Kiddle Encyclopedia.