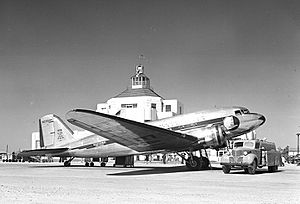 The museum is housed in the Houston Municipal Airport Terminal building, a streamline moderne airport terminal built with Public Works Administration (PWA) funds in 1940. The terminal building is among the few surviving examples of classic art deco airport architecture from the 1940s. The terminal served Houston during the years when air travelers dressed in their best and embarked for destinations aboard roaring prop liners like the Douglas DC-3 and the Lockheed Constellation. Designed by architect Joseph Finger (who also designed Houston's City Hall), the terminal was designed to meet Houston's growing role as a center for air commerce in the late 1930s. The terminal served as the only commercial air terminal for Houston until 1954, and was subsequently used by various tenants until 1978. In that year, Hobby Airport's manager James Delong proposed demolishing the 1940 terminal to free up ramp space, but enthusiasts blocked the demolition. The terminal was then unoccupied for nearly 20 years.

In 1988 Stephen Fox of Cite said that the terminal was "in very shabby condition."

Restoration and modern use

The city of Houston stabilized the exterior of the building, and members of the Houston Aviation Alliance worked to save the terminal. In 1998, the Houston Aeronautical Heritage Society (HAHS), a nonprofit organization, was formed primarily to save the threatened terminal building. HAHS recognized that funding and renovation must be completed in phases, and created a plan to restore the building over time. In late 2003, HAHS's contractors completed the asbestos and lead abatement of the north wing of the terminal. The abatement process stripped the original plaster from the interior walls, leaving the non-loadbearing tile curtain walls of the terminal intact.

The rest of the building completed asbestos abatement in May 2008 and completed atrium and mezzanine reconstruction in February 2009. The full lower floor will be restored to its original condition when funds permit. The museum will spread out and occupy the entire first floor of the terminal building and then begin renovation of the upper floors.

The American Institute of Aeronautics & Astronautics (AIAA) designated the 1940 Air Terminal Museum a Historic Aerospace Site. The 1940 Air Terminal is the AIAA's 35th aerospace site recognized as a rare example of classic Art Deco airport architecture. In February 2010, the Houston Aeronautical Heritage Society was presented with a Good Brick Award for excellence in preservation for the 1940 Air Terminal Museum. Good Brick Awards are given annually from the Greater Houston Preservation Alliance. In 2008 the Houston Press declared the terminal the "Best Piece of Aviation History".

In 2008, HAHS was granted a license to the oldest hangar on Hobby Airport's grounds, a 1929 Great Silver Fleet Maintenance Hangar. The organization will use this hangar to display larger exhibits from the collection, such as two simulators, and HAHS's aircraft collection, which includes a 1943 Lockheed Lodestar executive businessliner, and an S-58 Sikorsky Helicopter that was outfitted for civilian heavy lifting. 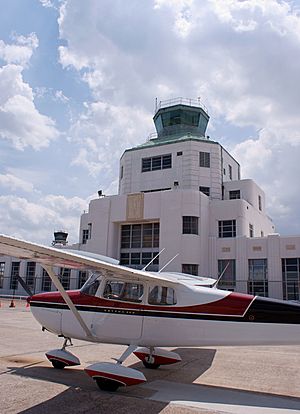 The 1940 Air Terminal Museum receives funding through grants from many private and public foundations, as well as individual donors. The museum also operates a Members' Program, which allows special access to some functions for members. The museum and its buildings are also available for private functions.

The 1940 Air Terminal Museum is the project of the Houston Aeronautical Heritage Society. The Houston Aeronautical Heritage Society is a Texan non-profit corporation founded to research, promote and preserve the aeronautical heritage of Houston and southeast Texas. The society was founded in 1998 by a group of aviation, architecture and history enthusiasts. The society includes persons from all walks of life, including students and retirees, architects and attorneys, educators and engineers, community leaders and commercial pilots.

The Houston Aeronautical Heritage Society is recognized as a 501(c)(3) tax-exempt organization by the Internal Revenue Service. The society is funded through private and public grants, corporate and personal contributions and net proceeds from revenue generating endeavors such as museum memberships and gift shop sales.

All content from Kiddle encyclopedia articles (including the article images and facts) can be freely used under Attribution-ShareAlike license, unless stated otherwise. Cite this article:
1940 Air Terminal Museum Facts for Kids. Kiddle Encyclopedia.