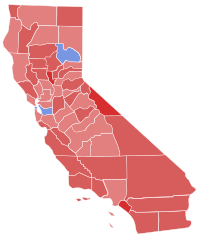 The California gubernatorial election, 1966 was held on November 8, 1966. The election was a race between incumbent Governor Pat Brown, the Democratic candidate, and actor Ronald Reagan, the Republican candidate.

After his re-election victory over former Vice President Richard Nixon in 1962, Brown was strongly considered for Lyndon Johnson's 1964 ticket, a spot that eventually went to Hubert Humphrey. However, Brown's popularity began to sag amidst the civil disorders of the Watts riots and the early anti-Vietnam War demonstrations at U.C. Berkeley.

All content from Kiddle encyclopedia articles (including the article images and facts) can be freely used under Attribution-ShareAlike license, unless stated otherwise. Cite this article:
1966 California gubernatorial election Facts for Kids. Kiddle Encyclopedia.