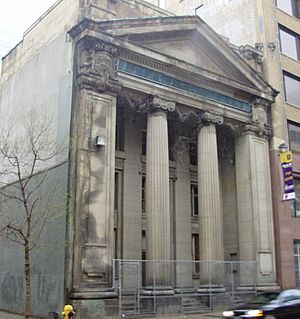 The historic building at 197 - 199 Yonge Street was formerly a four-floor Canadian Bank of Commerce building built in 1905 by architects Darling and Pearson and declared as a historical property by the City of Toronto, Ontario, Canada in 1974. The bank left the building in 1987. The bank address was 199 Yonge Street, the numbers still showing above the entrance.

Next door at 205 Yonge Street is another historic site. The gap between the two sites was once the Colonial Tavern, demolished in the 20th century.

197 Yonge Street will be preserved and become part of the Massey Tower project.

All content from Kiddle encyclopedia articles (including the article images and facts) can be freely used under Attribution-ShareAlike license, unless stated otherwise. Cite this article:
197 Yonge Street Facts for Kids. Kiddle Encyclopedia.