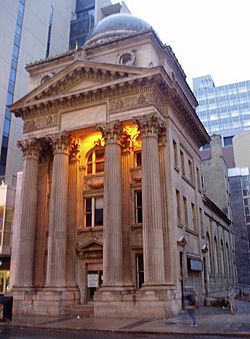 205 Yonge Street was formerly a four-story Bank of Toronto building built in 1905 in Toronto, Ontario, Canada. It was designated under the Ontario Heritage Act in 1975. The E. J. Lennox-designed structure has a domed roof and Corinthian columns on the front, and it is an example of neoclassical architecture.

Next door at 197 Yonge Street is another historic building. The gap between the two sites was once the Colonial Tavern, which was closed in the 1970s and demolished. The two buildings are located on the east side of Yonge Street, across from the Toronto Eaton Centre, and a few feet north of the Elgin and Winter Garden Theatres.

205 Yonge was once home to the Toronto Historical Board, a city agency that was in charge of protecting historic sites in Toronto. It left the building in 1998 when the agency was revamped into Heritage Toronto. Heritage Toronto's logo is based on the profile of this building.

All content from Kiddle encyclopedia articles (including the article images and facts) can be freely used under Attribution-ShareAlike license, unless stated otherwise. Cite this article:
205 Yonge Street Facts for Kids. Kiddle Encyclopedia.