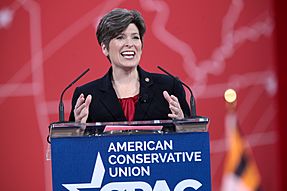 The 2014 United States Senate election in Iowa took place in Iowa on November 4, 2014. In it, Republican State Senator Joni Ernst faced off Democrat Bruce Baley. Ernst won the election with 52.1% of the vote to Baley's 43.8%.

Three televised debates were set to occur, one in Des Moines, one in Davenport and one in Sioux City.

C.E.O. Mark Jacobs ran in the primaries. He won just one county in North Iowa, and 16.8% of the vote.

Radio host Sam Clovis ran in the primaries. He won seven counties in Northwest Iowa, and 18.0% of the vote.

Matthew Whitaker, an attorney, ran, but did not win any counties, and carried just 7.5% of the vote.

All content from Kiddle encyclopedia articles (including the article images and facts) can be freely used under Attribution-ShareAlike license, unless stated otherwise. Cite this article:
2014 United States Senate election in Iowa Facts for Kids. Kiddle Encyclopedia.