Local elections in Latvia were held on 3 June 2017. All 119 municipal councils of the country took part in the elections.

The following map shows the results of the local elections in different territories of Latvia. The colour, which each territory has, indicates the party, which received the majority of votes in this territory. 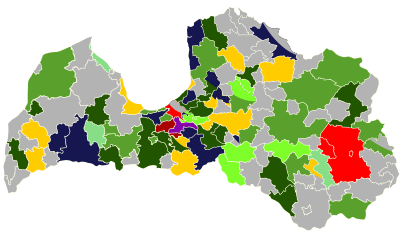 The results of local elections in two biggest Latvian cities (Riga and Daugavpils) are given below.

The coalition of Social Democratic Party "Harmony" and party "Proud to serve Riga" ruled Riga before the elections. The representative of "Harmony" Nils Ušakovs was the mayor of the city and the head of the city council. All other parties which took part in the elections agreed to work together to dismiss Ušakovs form the post of mayor.

According to the elections results the coalition of "Harmony" and party "Proud to serve Riga" lost several deputies in the council but received the majority of 32 places out of 60. On 22 June 2017 Nils Ušakovs was reelected as the head of the city council.

Before the elections, the representative of the Latgalian party Jānis Lāčplēsis was the mayor of the city and the head of the city council. He was elected to these posts unanimously (with no deputy voted against) in 2013 after local elections of that year.

According to the elections results the Latgalian party increased the number of its deputies in the council, however, did not receive the majority. At the same time, its rivals Social Democratic Party "Harmony" and "Our party" concluded a coalition agreement. On 26 June 2017 Andrejs Elksniņš from "Harmony" was elected as the mayor and the head of the city council while the leader of "Our party" Rihards Eigims became vice-mayor and the deputy head of the city council.

So the Social Democratic Party "Harmony" became the ruling force in municipal councils of two biggest cities in Latvia.

All content from Kiddle encyclopedia articles (including the article images and facts) can be freely used under Attribution-ShareAlike license, unless stated otherwise. Cite this article:
2017 Latvian local elections Facts for Kids. Kiddle Encyclopedia.