Democrats net gained of 41 seats in the United States House of Representatives, gaining a majority in the chamber. This ended the control that the Republican Party had over the entire legislature. The Republican Party kept control of the United States Senate, making a net gain of two seats and defeating four Democratic incumbents in states that had voted for Trump in 2016. In the state elections, Democrats gained seven state governorships, control of at least 350 state legislative seats, and control of six state legislative chambers.

The elections had the highest voter turnout seen in midterm elections since 1914. This election was believed to be a "blue wave" election for the House and the states, but not the Senate. 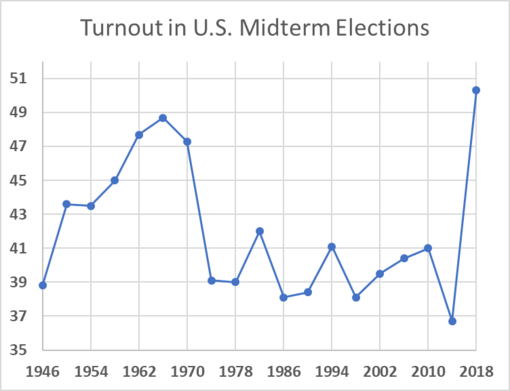 On November 6, the United States Election Project estimated that 40 million early voters cast ballots on November 6, breaking the record for the number of early votes.

Number of people who watched it on television

All content from Kiddle encyclopedia articles (including the article images and facts) can be freely used under Attribution-ShareAlike license, unless stated otherwise. Cite this article:
2018 United States elections Facts for Kids. Kiddle Encyclopedia.