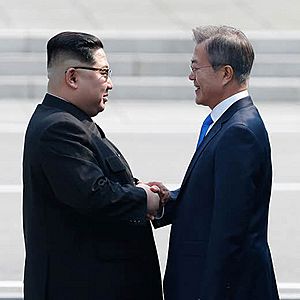 It was also the first time since the end of the Korean War in 1953 that a North Korean leader entered the South's territory. President Moon also briefly crossed into the North's territory.

The summit was focused on the North Korean nuclear weapons program and denuclearization of the Korean Peninsula. The Panmunjom Declaration was made following the summit.

The two Koreas' high Government officials held a working-level meeting on April 4 to discuss summit details at the Peace House. The summit would address mainly denuclearization, peace establishment and improvement of inter-Korean relations for their mutual benefit. Although more than 200 NGOs called for the inclusion of human rights issues in the North and Japanese Prime Minister Shinzo Abe for its abducted citizens in the agenda, these were not included. 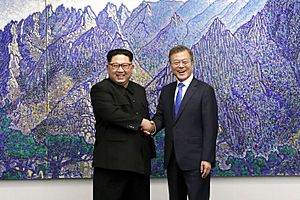 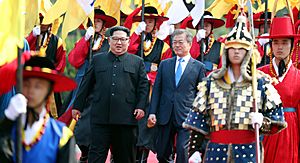 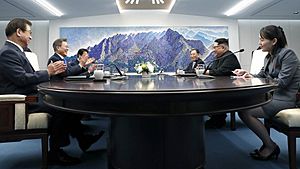 Talks inside the Peace House

The Peace House was accepted by North Korea for the meeting's location, from among the venues proposed by South Korea, located just south of the military demarcation line in the Joint Security Area of Panmunjeom.

The meeting was the first visit by a North Korean leader to the territory of the South. This initial meeting of the two leaders, who shook hands over the demarcation line, was broadcast live. Moon accepted an invitation from Kim to briefly step over to the North's side of the line before the two walked together to the Peace House.

As well as the talks, the two leaders conducted a tree-planting ceremony using soil and water from both sides and attended a banquet. Many elements of the meeting were expressly designed for symbolism, including an oval meeting table measuring 2,018 millimetres (79.4 in) to represent the year.

In a joint press conference, Kim and Moon made a number of pledges regarding co-operation and peace. Notably, these included a pledge to work towards the denuclearization of the Korean peninsula, although Kim did not explicitly agree to give up the North's nuclear weapons. Additionally the two leaders agreed to, later in the year, convert the Korean Armistice Agreement into a full peace treaty, formally ending the Korean War after 65 years.

Additionally, the leaders pledged to end "hostile activities" between their nations, for the resumption of reunion meetings for divided families, to improve connections along their border, and for the cessation of propaganda broadcasts across it. This agreement was known as the Panmunjom Declaration for Peace, Prosperity and Unification of the Korean Peninsula and was signed by both leaders in the South Korean border village of Panmunjom.

The press conference was shown live on South Korean television; however, live coverage was not available in North Korea because the country's policy is not to broadcast live events involving its leader.

The leaders pledged for greater communication between them, and that Moon would visit Pyongyang this fall.

All content from Kiddle encyclopedia articles (including the article images and facts) can be freely used under Attribution-ShareAlike license, unless stated otherwise. Cite this article:
2018 inter-Korean summit Facts for Kids. Kiddle Encyclopedia.