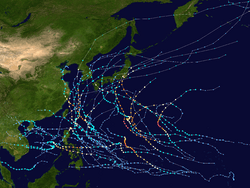 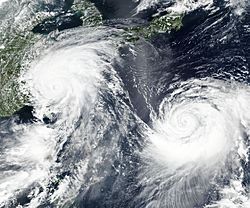 January was very active, as it opened with Tropical Storm Pabuk (2019), the earliest-forming tropical storm in the Western Pacific, beating Typhoon Alice (1979), it was also the first system in the 2019 North Indian Ocean cyclone season, as Pabuk crossed the boundary as a tropical storm, right after its Malaysian landfall, before it disappeared due to wind shear. Tropical Depression 01W formed near the Marshall Islands, where a day later, it dissipated, but after crossing into the Philippine Sea, the depression regenerated into Tropical Depression Amang, and made landfall in the Samar region, where it soon dissipated, but floods from tropical depression Amang resulted in a million-peso damage and 10 deaths in Mindanao. 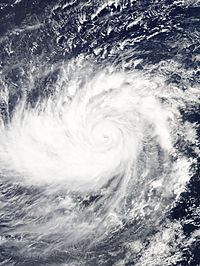 February was also active, with Tropical Depression 02W, which became Tropical Storm Wutip on February 19, and developed gradually in the Western Pacific, and became the season's first typhoon, and after an eyewall replacement cycle, it became the season's first Category 5 super typhoon, beating Typhoon Higos. After this, Wutip was attack by massive wind shear amounts, but managed to enter the Philippine Area of Responsibility as Tropical Depression Betty before dissipating in the Philippine Sea, and many are debating on whether Wutip's immense power was normal as March was coming, or it was caused by the deadly climate change, which already took a toll on the world, humans and animals alike. Wutip spared landmasses, but the Micronesia Islands suffered minimal damages after Wutip passed there as a Category 3 typhoon.

March was an inactive season, with only one tropical depression forming, Chedeng, which made landfall in Mindanao, before dissipating in the Sulu Sea, where wind shear was destructively high.

No storms in April formed, but May had 4 tropical depressions were monitored by the Japan Meteorological Agency, but were short lived and never intensified. 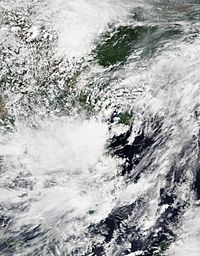 Mun at its peak

July was also fairly inactive, in which no typhoons formed. After Tropical Storm Egay dissipated, a new tropical depression in the South China Sea absorbed its remnants and became Tropical Storm Mun. Mun then made landfall in Hainan, where it caused minimal damages. In mid-July, Tropical Depression Falcon formed, becoming Tropical Storm Danas, which was confusing for many agencies, since it was battered by wind shear, and PAGASA announced that Danas (Falcon) looped over the landmass, while JMA and JTWC just announced the system was just stationary east of Cagayan. The blown off cloudiness split into 2 separate systems, but Danas re-absorbed the other one, while the one in the South China Sea intensified into Tropical Depression Goring, where it affected Taiwan and Batanes. Tropical Depression Goring's remnants was absorbed by a new system, where it became Tropical Storm Nari and headed for Japan.

Tropical Storm Wipha formed in the South China Sea, but only caused minimal damages in China. 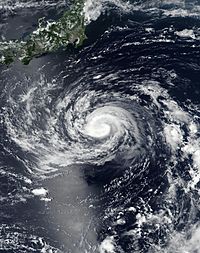 The season finally pushed the kickstart in August, with a slowly-intensifying system, became Tropical Storm Francisco on August 1. The system gradually developed over a couple of days, until it became a typhoon, meanwhile Tropical Depression Hanna became Tropical Storm Lekima as Francisco made landfall in Kyushu and dissipated, and Lekima became the seasons'third typhoon, and rapidly intensified along with its slow movement over the Philippine Sea, and became the season's second super typhoon. Tropical Storm Krosa and a new tropical depression (would be later absorbed by Lekima) formed alongside Typhoon Lekima (2019), while it made landfall in China as the second costliest Chinese storm in history, while Krosa became an erratic storm as it made its way through Japan.

By mid-August, Tropical Depression Ineng became Tropical Storm Bailu, and continued to intensify into a severe tropical storm, enhancing the southwest monsoon, which caused a State of Calamity over Ilocos Norte and Php.1 billion damages there, and Bailu made landfall in Taiwan and China, causing more damages.

Tropical Depression Jenny became Tropical Storm Podul in late-August, and made most of its damages in Vietnam. 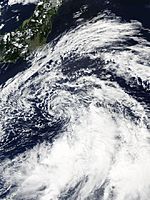 A tropical depression near Japan

3 tropical depressions formed on the first day of September, the first was Tropical Depression Kabayan, which became Tropical Storm Kajiki, which was erratic, causing damages and flooding in Vietnam and the Philippines. The second was Tropical Depression Liwayway, which became Tropical Storm and later Typhoon Lingling, which was the strongest storm to make landfall in North Korea. The third was Typhoon Faxai, which was the strongest storm to strike Tokyo in 60 years.

In mid-September, Tropical Depression Marilyn interacted with a nearby tropical depression and tropical storm Peipah, which sended it back into the Philippine Sea, but was renamed Nimfa, and Nimfa intensified into Tropical Storm Tapah, and later became a typhoon before Japan landfall. Behind Tapah was Typhoon Mitag, which became a Category 2 and struck the same areas as Tapah. 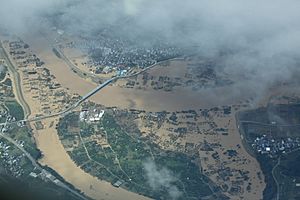 An aerial view of flooding in Nagano, Japan.

Tropical Depression 20W formed on October 5, 2019 in the outer Western Pacific, and later intensified into Tropical Storm Hagibis. Hagibis later became a typhoon, as it rapidly intensified towards the Mariana Islands and Guam. On 7 October, while continuing to move west, Hagibis explosively intensified and became a super typhoon in the space of only a few hours, developing a pinhole eye. As it approached the uninhabited areas of the Mariana Islands, strong convective activity as a result of extremely favourable conditions saw Hagibis became a very powerful Category 5-equivalent super typhoon with one-minute sustained wind speeds of 260 km/h (160 mph). The National Weather Service also began issuing advisories for its areas of responsibility, with a typhoon warning issued for Garapan and Tinian, and tropical storm advisories issued for Sinapalo and Hagåtña. Hagibis passed over the Mariana Islands at 15:30 UTC on 7 October at peak intensity, with 10-minute sustained winds of 195 km/h (120 mph) and a central pressure of 915 hPa (27.02 inHg). After passing the Mariana Islands Hagibis underwent an eyewall replacement cycle, thus weakening the typhoon. On October 12, Hagibis made landfall on Japan with sustained wind speeds of 150 km/h. Many competitions had to be cancelled due to the storm, including a Formula 1 qualifying match. Flooding in Japan was serious, and the storm costed 15 billion US dollars.

Three other tropical cyclones formed in October: one called Neoguri which struck the southern parts of Japan; another one called Bualoi mostly was on ocean and did not make landfall, and Matmo, which made landfall on Vietnam and brought heavy rainfall to southeast Asia. The remnants of it developed into an Indian Ocean cyclone known as Bulbul.

In the month of November, six named storms were recorded, including the most intense tropical cyclone of the season, Halong, formed on November 1 and became to intensify as a Category 5 super typhoon four days later with 10-minutes sustained winds of 215 km/h (130 mph) and with a minimum pressure of 905 millibars. In late-November, another storm formed that was named Kammuri on November 24. Kammuri became intensified as a Category 4 typhoon on the Saffir-Simpson Wind Scale, Kammuri made landfall in Philippines on November 30 confirming twelve people who died from the storm, with $116 million in damage.

Altogether, the season was an above-average season with 29 named storms, and the costliest season on record.

Within the Northwest Pacific Ocean, both the Japan Meteorological Agency (JMA) and the Philippine Atmospheric, Geophysical and Astronomical Services Administration (PAGASA) assign names to tropical cyclones that develop in the Western Pacific, which can result in a tropical cyclone having two names. The Japan Meteorological Agency's RSMC Tokyo — Typhoon Center assigns international names to tropical cyclones on behalf of the World Meteorological Organization's Typhoon Committee, should they be judged to have 10-minute sustained windspeeds of 65 km/h (40 mph). PAGASA names to tropical cyclones which move into or form as a tropical depression in their area of responsibility located between 135°E and 115°E and between 5°N and 25°N even if the cyclone has had an international name assigned to it. The names of significant tropical cyclones are retired, by both PAGASA and the Typhoon Committee. Should the list of names for the Philippine region be exhausted then names will be taken from an auxiliary list of which the first ten are published each season. Unused names are marked in gray.

A tropical cyclone is named when it is judged to have 10-minute sustained wind speeds of 65 km/h (40 mph). The JMA selected the names from a list of 140 names, that had been developed by the 14 members nations and territories of the ESCAP/WMO Typhoon Committee. Retired names, if any, will be announced by the WMO in 2020, though replacement names will be announced in 2021. The next 28 names on the naming list are listed here along with their international numeric designation, if they are used. During the season, the name Mun was used for the first time, after it replaced the name Fitow, which was retired after the 2013 season.

This season, PAGASA will use its own naming scheme for tropical cyclones that either develop within or move into their self-defined area of responsibility. The names were taken from a list of names last used during 2015 and are scheduled to be used again during 2023. All of the names are the same except Liwayway and Nimfa, replacing the names Lando and Nona after these were retired.

This table summarizes all the systems that developed within or moved into the North Pacific Ocean, to the west of the International Date Line during 2019. The tables also provide a brief summary of a systems intensity, duration, land areas affected and any deaths or damages associated with the system.

All content from Kiddle encyclopedia articles (including the article images and facts) can be freely used under Attribution-ShareAlike license, unless stated otherwise. Cite this article:
2019 Pacific typhoon season Facts for Kids. Kiddle Encyclopedia.