A special election happened on November 3, 2020 to elect a Senator from the U.S. state of Arizona. It happened because the last senator, John McCain, died in 2018. Primary elections happened on August 4, 2020 to choose who would run for the election from each party. The Republican Party chose Martha McSally. She beat Daniel McCarthy to be the Republican candidate. Only one person, Mark Kelly, ran for the Democratic Party.

Kelly won the election and got 51.2% of the votes, so he became the junior senator from Arizona. This meant both Senators from Arizona were now from the Democratic Party. He officially became a senator on December 2, 2020 when he was sworn in. 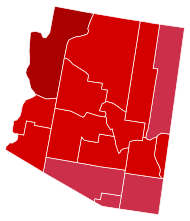 None of the Libertarian Party candidates got enough votes in the primary to be in the Senate election.

All content from Kiddle encyclopedia articles (including the article images and facts) can be freely used under Attribution-ShareAlike license, unless stated otherwise. Cite this article:
2020 United States Senate special election in Arizona Facts for Kids. Kiddle Encyclopedia.