27a-35a Dalgety Road, Millers Point are heritage-listed terrace houses located at 27a, 29a, 31a, 33, 35a Dalgety Road, in the inner city Sydney suburb of Millers Point in the City of Sydney local government area of New South Wales, Australia. The property is also known as Dalgety Terrace and Dalgety Terraces. It was added to the New South Wales State Heritage Register on 2 April 1999.

Millers Point is one of the earliest areas of European settlement in Australia, and a focus for maritime activities. These are a group of early twentieth century workman's terraces built c. 1911 as part of the post plague redevelopment by the Sydney Harbour Trust. First tenanted by the NSW Department of Housing in 1986. 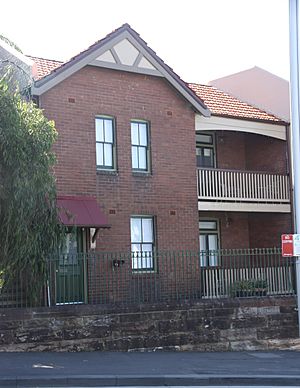 These large terraces feature elaborate timber verandahs with ornamental brackets in the Federation style. Also, they have teracotta Marsailles roofs. The terrace consists of a two bedroom units on both the ground floor and the first floor. The stairs leading to the upper units are generally shared by two units, with the entry to the lower units directly to the sides of them. Storeys: Two; Construction: Facebrick walls, tiled roof, timber verandah and balustrading. Style: Federation.

As at 23 November 2000, this terrace is one of a group of early twentieth century workmen's terraces built as part of the post plague redevelopment.

All content from Kiddle encyclopedia articles (including the article images and facts) can be freely used under Attribution-ShareAlike license, unless stated otherwise. Cite this article:
27a-35a Dalgety Road, Millers Point Facts for Kids. Kiddle Encyclopedia.