360 Main is a 32-storey office tower located near Portage and Main in downtown Winnipeg, Manitoba.

The tower was originally known as the Commodity Exchange tower. Although the naming rights expired in 1990, it was not officially renamed to 360 Main until 2010. Throughout this time it has been unofficially known as the Trizec building.

Initial announcements of 360 Main St. were that it would be the office component of the larger Winnipeg Square development by Trizec Corporation, comprising a 20-storey office tower for Scotiabank headquarters costing $7.5 million and an underground parkade-office-hotel structure costing $14.8 million. Construction took place in 1978, with Smith Carter Parkin as the principal architects. The building was certified as BOMA Best Level 3 in 2011. 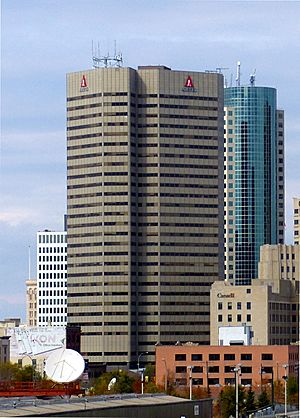 In late 2016 Artis REIT announced that 360 Main would be completely reclad in glass. The reclad project cost $25 million and was completed in 2018.

Additionally the pad to the south would finally be developed as 300 Main St. where a 42-storey apartment building will be constructed. Construction is ongoing now, with completion estimated for 2021. It will stand at 465 feet (142 m), the new tallest building in Winnipeg.

Originally the purpose of 360 Main St. was to house the Winnipeg Commodity Exchange and associated trading companies and government departments. In the 2000s most of the original commodity trading companies merged or moved out.

All content from Kiddle encyclopedia articles (including the article images and facts) can be freely used under Attribution-ShareAlike license, unless stated otherwise. Cite this article:
360 Main (Winnipeg) Facts for Kids. Kiddle Encyclopedia.