42nd Street - Bryant Park is an express station on the IND Sixth Avenue Line of the New York City Subway. It is located at the intersection of 5th Avenue, 6th Avenue and 42nd Street in Midtown Manhattan. It is served by the B, D, F and M trains and by the <F> train during rush hour in the peak direction. Above the station are Bryant Park and the New York Public Library.

The B and D trains are express trains, so that means they go on express tracks.

The F and M trains are local trains, so they go on local tracks. 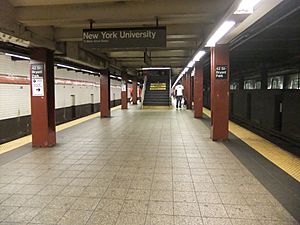 When you exit the station, you can see the Bank of America Tower on 6th Avenue between 42nd and 43rd Streets.

Sometimes, E trains and other trains enter this station via 6th Avenue to World Trade Center or Jamaica Center or other stations.

But there is another station on 5th Avenue for the 7 train, called 5th Avenue - Bryant Park.

After this station, the next stations will be 47th and 50th Streets Rockefeller Center and 34th Street Herald Square.

All content from Kiddle encyclopedia articles (including the article images and facts) can be freely used under Attribution-ShareAlike license, unless stated otherwise. Cite this article:
42nd Street–Bryant Park/Fifth Avenue station Facts for Kids. Kiddle Encyclopedia.