525 William Penn Place (also known as the Citizens Bank Tower) is a skyscraper located in downtown Pittsburgh, Pennsylvania. It was completed in 1951 for the Mellon National Bank and the U.S. Steel Corporation. At 520 feet (160 m) tall, it was the second-tallest building in Pittsburgh until 1970, and the third-tallest until 1984. The building has 41 floors and approximately 950,000 square feet (88,000 m2) of office space. Presently it is the third-largest office building by square feet in downtown Pittsburgh. In 2016, BNY Mellon sold the building for $67.65 million.

525 William Penn Place was one of the first skyscrapers built in Pittsburgh as part of longtime Mayor David Lawrence's Renaissance I building initiative to rebuild downtown Pittsburgh. The building was built by the then Pittsburgh Pirates owner John W. Galbreath with loans from the Mellon National Bank and additional financing from insurance companies. At the time of construction, Mellon purchased floors 2-8 by deed in 1951 from John W. Galbreath. The building was designed by Harrison & Abramovitz with construction by the Turner Construction Company. It was built on the site of the Henry Hotel which was demolished to prepare the site for the tower in 1949.

The original plan for the building was to construct the ground floors in the same architectural design as the Mellon National Bank on Smithfield Street adjacent to the skyscraper and to allow open flow of Mellon employees between the two buildings with Mellon occupying the first eight floors. This plan was later modified during construction to give the entire building its own modernist style and an open shared lobby with three elevator banks and multiple passages between the skyscraper and the Mellon National Bank on Smithfield Street. U.S. Steel leased the floors 9 through 37 for their corporation and various subsidiaries. The top floors were reserved for the T. Mellon & Sons Company, various Mellon family charities offices, and a penthouse for philanthropist Richard King Mellon. U.S. Steel was the primary tenant until completing their own skyscraper, U.S. Steel Tower, on Grant Street in 1970. At that time, Mellon Bank owned floors 2-8 and leased the remainder of the building from the John W. Galbraith Co. In April 1982, Mellon Bank finally purchased the remainder of the building for $10 million.

Mellon Bank (The Bank of New York Mellon since 2007) remained the owner of 525 William Penn Place and the largest occupier of space at approximately half the building (approximately 500,000 square feet). The remainder of the space is leased to various businesses and law firms with Citizens Bank as the largest tenant occupying approximately 250,000 square feet (1/4 of the building). Citizens Bank also leases from Mellon signage rights to the building which include the right to erect signage at the top of the tower and above the entry closest to Fifth Avenue.

In January 2015, BNY Mellon announced it would begin slowly moving employees to other space in downtown Pittsburgh and seek a buyer for the building.

The first major building renovation of 525 William Penn Place occurred from 1986 to 1987 with a complete building renewal. New windows (approximately 3,344), heating, air, plumbing, and new mechanical systems were installed. In 2001, a new renovation commenced with the complete rebuilding of the lobby, building entrances, elevator cabs, and restrooms. The building was awarded an Energy Star label in 2008 for its operating efficiency. In 2010, the building was further awarded a Gold Level LEED certification by the US Green Building Council. 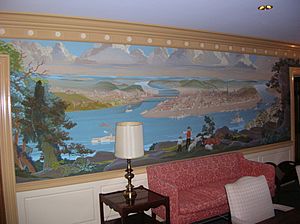 Wall mural painting in the anteroom to the 41st floor former Mellon Executive Board room, 525 William Penn Place. Mural depicts Pittsburgh Point in 1849 as reproduced from a painting by B.F. King.

In the basement garage, accessible by vehicles from Oliver Avenue for deliveries, exists a working vehicle turntable. Trucks can enter, unload, and then be "turned around" by operating the turntable to exit the building.

There is a tunnel that runs between 525 William Penn Place and One BNY Mellon Center on Grant Street, running under the Union Trust building. This tunnel connects all three buildings and while not open to the public, remains in use by building staff and tenants.

All content from Kiddle encyclopedia articles (including the article images and facts) can be freely used under Attribution-ShareAlike license, unless stated otherwise. Cite this article:
525 William Penn Place Facts for Kids. Kiddle Encyclopedia.