Kids Encyclopedia Facts
This page is about the office building at 1790 Broadway, known as 5 Columbus Circle. For the former theater at the address, see Majestic Theatre (Columbus Circle).

5 Columbus Circle (also known as 1790 Broadway and formerly known as the United States Rubber Company Building) is an office building on the southeast corner of Broadway and 58th Street in Midtown Manhattan in New York City, just south of Columbus Circle. Designed by Carrère and Hastings in the Beaux-Arts style, it is 286 feet (87 m) tall with 20 stories.

The building contains a marble facade with a copper cornice above the 20th story. The windows are grouped into recessed bays, separated horizontally by metal spandrels and vertically by narrow piers. The base contains part of a flagship store for Nordstrom, which extends into Central Park Tower and another building.

5 Columbus Circle was originally built as the headquarters of the United States Rubber Company (U.S. Rubber) in 1912. It was part of Broadway's "Automobile Row" during the early 20th century. U.S. Rubber moved to a new headquarters in 1940, and the building was sold several times before being acquired by the West Side Federal Savings and Loan Association. The First Nationwide Savings Bank, which acquired the West Side Federal Savings bank, sold the building in 1985 to John Phufas and John O'Donnell, and small renovations were undertaken in subsequent years. The New York City Landmarks Preservation Commission designated the building as a city landmark in 2000.

In the 20th century, the area was part of Manhattan's "Automobile Row", a stretch of Broadway extending mainly between Times Square at 42nd Street and Sherman Square at 72nd Street. Before the first decade of the 20th century, the area was occupied mostly by equestrian industries and was described by The New York Times as "thoroughly lifeless". By 1907, the Times characterized this section of Broadway as having "almost a solid line of motor vehicle signs all the way from Times Square to Sherman Square". In the late 1900s and early 1910s, several large automobile showrooms, stores, and garages were built on Broadway, including the B.F. Goodrich showroom (later part of Central Park Tower) and 224 West 57th Street just south of 5 Columbus Circle. During that time, 5 Columbus Circle was one of several such major developments in the area.

5 Columbus Circle is 286 feet (87 m) tall, with 20 stories and a penthouse, as well as two basement levels. The largely marble-clad building was designed by Carrère and Hastings. For their design of 5 Columbus Circle, Carrère and Hastings took inspiration from their past work, which was largely in the French Renaissance style, including the former Blair Building in Manhattan's Financial District. The building was erected by Norcross Brothers. There is also a "light court" on the eastern side of the building, facing Central Park Tower; it allowed sunlight to reach the interior offices at the time of 5 Columbus Circle's construction.

Unlike many commercial structures of the time, which mostly contained facades of brick, limestone, or terracotta, 5 Columbus Circle has a curtain wall facade made mainly of Vermont marble. 5 Columbus Circle's main elevations, or sides, face 58th Street to the north and Broadway to the west. The two primary elevations are connected by a curved corner, and the marble cladding served to emphasize the thinness of the curtain wall. On each floor, there are seven bays facing Broadway and eight facing 58th Street. The eastern and southern facades are faced in plain brick with some window openings on either side. 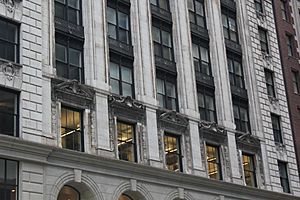 The main entrance to the building is in the southernmost bay facing Broadway, and contains a double door of bronze and glass beneath a glass transom. A freight entrance is in the two eastern bays on 58th Street. The lowest two stories have a colonnade of Ionic columns, looking into the Nordstrom store in the base. There are arched windows on the 1st and 2nd stories, looking from the street into the Nordstrom store. These are replicas of the original windows that looked into the salesroom of the building's namesake, the United States Rubber Company (U.S. Rubber). After the 1958 renovation, there was a door at the corner of Broadway and 58th Street, leading to a ground-level banking space. The remainder of the 1st floor contained double-height display windows. The 2nd floor was clad with gray marble panels, with a stone band course running above it. These modifications were removed starting in 2018, when the base was restored to its original design.

On the 3rd through 19th stories, the outermost bays on Broadway and 58th Street are clad with rusticated stone, while the center bays are recessed between flat stone piers. The outermost bays have sash windows topped by stone voussoirs on the 3rd through 6th stories, and by elaborate carvings on the 7th story. The center bays have elaborate stone surrounds around the 3rd-story windows, and sash windows with metal spandrels on the 4th through 7th stories. The 8th story is treated as a transitional story, with band courses below and above it. The outer bays of the 8th story contain rounded pediments that are part of the band course above.

A balustrade wraps around the 9th story, atop the band course. The 9th through 19th stories contain rectangular sash windows in the side bays (with spandrels between each pairing of two stories). The center bays have sash windows with metal railings, which are recessed between piers, as well as metal spandrel panels between the windows on each floor, except for stone panels above the 10th and 16th floors. There is a band course above the 19th story. The 20th story has twelve sash windows on each side, with carved window surrounds in the outer bays. The facades on Broadway and 58th Street are topped by a large copper cornice.

5 Columbus Circle has 196,000 square feet (18,200 m2) of floor space. This provided approximately 6,300 square feet (590 m2) of usable office space on each floor, with up to 17 offices on each floor. When completed in 1912, 5 Columbus Circle was intended exclusively for office and mercantile use. U.S. Rubber had a salesroom on the ground level and a basement and subbasement for tire storage. On the other floors, each office is separated by hollow-tile or metal partitions, although fireproof wood is used in "special rooms" on two of the upper stories. Most of the interior trim is made of hollow metal, while the floor surfaces used masonry, marble, or rubber tiling. The upper four floors contain fireplaces. 5 Columbus Circle was erected with ten Otis elevators, as well as two emergency staircases. As of 2018[update], the building has six passenger and two freight elevators. 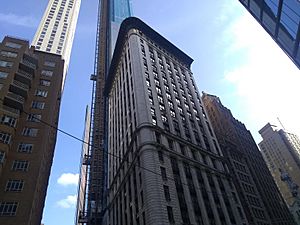 The upper stories, viewed from Broadway and 58th Street

In the years after its founding in 1892, U.S. Rubber came to control 70 percent of the United States' rubber footwear market, and also became a top seller of tires. Prior to the completion of 5 Columbus Circle, U.S. Rubber was headquartered in New Brunswick, New Jersey. In April 1911, U.S. Rubber leased the lot at the southeast corner of Broadway and 58th Street from Mary A. Fitzgerald for 21 years at a cost of $4,000 per year (equivalent to $76,577 in 2016). Carrère and Hastings drew up plans for a 20-story office building on the site, which would provide sufficient space for a new headquarters. When the plans were released in August 1911, the planned building was described by the New-York Tribune and The New York Times as the tallest structure on Broadway north of Times Square.

The U.S. Rubber Building was completed and ready for occupancy in mid-1912, with tenants moving there by that July. Upon the building's completion, U.S. Rubber occupied the ground-floor showroom, basements, and ten of the upper floors. The 15th through 17th floors were used as the company's general offices. The other floors were rented to various tenants, including the Society of Automobile Engineers, the Timken Roller Bearing Company, the National Tuberculosis Association, and taxi operator Keystone Transportation Company.

The Fitzgerald estate sold the Schulte Real Estate Company the site for $1.1 million in 1928, and title was then passed to businessman August Heckscher. U.S. Rubber acquired the land under the building outright in 1932, upon the expiration of the original lease. At the time of U.S. Rubber's land purchase, the Metropolitan Life Insurance Company had a mortgage loan of $800,000 against the property.

In December 1939, U.S. Rubber sold 1790 Broadway after acquiring space at the then-new 1230 Avenue of the Americas in Rockefeller Center, and paid off its mortgage on 1790 Broadway. U.S. Rubber moved its offices to Rockefeller Center three months later in March 1940, and the 8th through 14th floors at 5 Columbus Circle were rented to the National Health Council that October. 5 Columbus Circle was sold several times in subsequent years, including to Richard M. Lederer in 1944. The building was acquired in 1951 by the West Side Federal Savings and Loan Association bank, which hired Herbert Tannenbaum to remodel the ground level, second floor, and basement for its use. In 1959, the bank hired Tannenbaum again to redesign the lowest two stories of the facade in 1959, replacing the original cladding with a glass and gray-marble insert. In an interview with journalist Christopher Gray four decades later, Tannenbaum expressed regret for the renovation, saying, "It broke my heart to tear those beautiful Ionic columns out."

During the mid-20th century, the United States Department of State leased several floors at 5 Columbus Circle, while the NAACP also had its headquarters in the building from 1967 to 1982. The First Nationwide Savings Bank, which acquired West Side Federal Savings, sold the building in 1985 to John Phufas and John O'Donnell for $29.25 million. Phufas and O'Donnell hired Beyer Blinder Belle to renovate the space, and First Nationwide would continue to occupy eight floors. The renovation was complicated by the fact that no drawings of the original lobby design could be found. Nevertheless, the original ceiling rosettes and frieze were concealed above the dropped ceiling, and were restored after a Beyer Blinder Belle associate discovered them. The facade was also cleaned, but First Nationwide did not follow through with a plan to restore the lower section of the facade, which was estimated to cost at least $1 million. In early 2000, the building's owner 1790 Broadway Associates added windows to the second story of the facade. The New York City Landmarks Preservation Commission (LPC) designated 5 Columbus Circle, along with 224 West 57th Street and the Studebaker Building in Brooklyn, as official city landmarks on December 19, 2000. 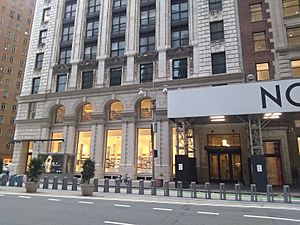 Reconstructed base, seen alongside the restored B. F. Goodrich Building facade at right, in 2020

Nordstrom signed a lease for retail space at the neighboring Central Park Tower in 2012 during that tower's construction. As part of the lease, Nordstrom would also occupy some space at 1776 Broadway and 5 Columbus Circle. In 2018, 1790 Broadway Associates announced plans to renovate the building's facade. The lowest two stories were re-clad with marble, and the elevators, boilers and cooling towers, and windows were replaced at a cost of $10 million. The Nordstrom store opened in late 2019, and Kaplan, Inc. also took space in the building that year.

All content from Kiddle encyclopedia articles (including the article images and facts) can be freely used under Attribution-ShareAlike license, unless stated otherwise. Cite this article:
5 Columbus Circle Facts for Kids. Kiddle Encyclopedia.