608 Fifth Avenue was built in 1930–1932 for Robert Walton Goelet, a member of the wealthy Goelet family, on the site of Ogden Goelet's old mansion. The structure was built while the construction of Rockefeller Center was ongoing, and its design was meant to complement that of the other buildings in Rockefeller Center. The structure, built in the Art Deco style, consists of a two-story base and an eight-story upper section, with a facade of green and white marble. The interior was elaborately designed in the Art Deco style. Both the first-story interior and the exterior were designated by the New York City Landmarks Preservation Commission as official city landmarks in 1992. 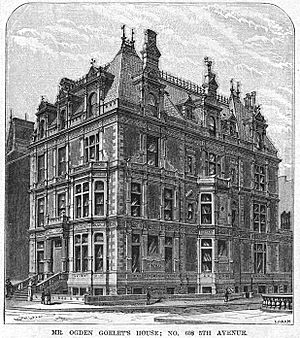 Fifth Avenue between 42nd Street and Central Park South (59th Street) was relatively undeveloped through the late 19th century. In the latter half of that century, mansions and other residences were constructed along the avenue. Among these were two country mansions that Edward H. Kendall designed for brothers Robert and Ogden Goelet, within one block of each other. The brothers were part of the Goelet family, a wealthy Dutch family that had founded the Chemical Bank. While Robert's estate was located at 589 Fifth Avenue, near present-day 48th Street, Ogden's estate was located at 608 Fifth Avenue one block north. When Ogden died in 1897, his widow inherited his property, while his brother Robert became the trustee of the property. Later, Robert's son Robert Walton Goelet became the trustee.

By the beginning of the 20th century, the mansions had given way to office and commercial buildings. In 1920, Robert Walton commissioned the construction of an art gallery at 606 Fifth Avenue, directly south of Ogden's estate; the gallery was then occupied by Henry Reinhardt & Son. Ogden's widow continued to live in the 608 Fifth Avenue mansion until 1926, and retained ownership of the structure through her death in February 1929. By then, the construction of Rockefeller Center was ongoing in the area immediately surrounding the Goelet lots. Rockefeller Center Inc. allowed Robert Walton Goelet to keep the lots at 2–6 West 49th Street because the company considered his "interest and concern" to be a "large concern". However, Goelet could not yet develop the western part of his site due to an easement that a neighbor held on the land. Even so, Goelet started selling the objects in the house in December 1929, hosting four such sales. The house and adjacent art gallery were demolished in March 1930. 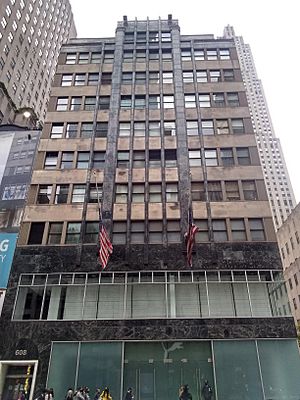 View of the Fifth Avenue facade

Plans for a commercial building were filed with the New York City Department of Buildings in March 1930. By that May, Goelet was still deciding between two different plans for a 15-story building. Though both options included office space above a two-story retail area, one of the options provided space for a showroom, and the other did not. The plans for the current 10-story commercial building was announced in December 1930.

The building was completed by 1932, but due to a lack of interest from large tenants, the space was subdivided into smaller units. Within the area bounded by Sixth and Fifth Avenues between 48th and 51st Streets, the Goelet Building was among the few plots that was not owned outright by Rockefeller Center's developers by the end of 1932. The newly completed structure was expanded westward in 1936, taking the unoccupied lot at 6 West 49th Street. The annex was four stories high. According to contemporary photographs of 608 Fifth Avenue, the ground floor was first occupied by several small stores, and by the 1960s, was taken up by the men's store John David.

608 Fifth Avenue became the Swiss Center Building in 1964 when fourteen Swiss-owned enterprises formed a coalition to "foster commercial, cultural, travel and financial activities identified with Switzerland". The companies held a 17-year lease on the structure with options for a 45-year extension. Lester Tichy was hired to redesign both the interior and exterior of the first and second floors, and the Swiss Center opened in 1966. The lease was sold to RFR Holding, a company held by German investors, in 1998.

In 1990, the building was proposed to become a New York City landmark. The building's then-owner Sarah Korein objected, as she wanted to expand the building by several stories once the Swiss Center's lease expired in 1996. Despite this, 608 Fifth Avenue and its interior were designated as official city landmarks in 1992. The New York City Landmarks Preservation Commission noted in its reports that "The owner and long-term lessee are not opposed to the designation". Garrison & Siegel renovated the lower floors to the original design in 1997. Vornado Realty Trust assumed RFR's mortgage in 2013 and paid $8.5 million that RFR owed on the mortgage. At that point, the Korein family still owned the land under 608 Fifth Avenue.

608 Fifth Avenue is a ten-story building in the Art Deco style, with elements of the International Style. It measures 70 feet (21 m) on Fifth Avenue to the east, and 161.6 feet (49.3 m) on 49th Street to the north. The building's footprint is in an "L" shape, with the longer leg of the "L" extending west-east along 49th Street, and a shorter leg extending north-south from 49th Street, on the opposite side of the building from Fifth Avenue.

608 Fifth Avenue was designed by Victor L. S. Hafner and built by structural engineer E. F. Faile & Co. However, the planning application to the city's Department of Buildings was submitted by Roy Clinton Morris on behalf of Edward F. Faile, leading to occasional disputes over who was the building's architect.

608 Fifth Avenue is one of three buildings on the western side of Fifth Avenue between 48th and 49th Streets. Directly to the south is the Childs Restaurants building at 604 Fifth Avenue, built in 1925 as the United States' first building with no columns at its corners. The southern side of the block, 600 Fifth Avenue, was built in 1949–1952 and was later incorporated into Rockefeller Center.

From the outset, 608 Fifth Avenue was designed as a commercial structure that would maximize the rapidly rising land value of the area, with retail on the lower floors and office stories above. At the time, retail space was more profitable per square foot than office space was, but the retail space also required large display windows facing the street, which nonetheless were extremely profitable. To maximize the surface area of these show windows, Faile designed the third and higher stories on a cantilevered structure located on two-story-tall outer columns recessed 5 feet (1.5 m) from the boundary of the property. Though the building was also outfitted with a recessed "light court", Faile designed the building's columns to be strong enough that the light court could be converted into additional office stories.

The construction of Rockefeller Center made it difficult to forecast whether numerous small stores or a large retailer would be more suitable for the site. To ensure that the retail space could more easily be converted into a department store if needed, 608 Fifth Avenue included features such as wide staircases and fire sprinklers, as well as a 17-foot-tall (5.2 m) ceiling in the rear of the first floor. When the second-floor mezzanine was built, it was suspended from this cantilever, instead of being supported by columns above the first floor, thus maximizing the first-floor retail space. In total, the retail space measures 44,000 square feet (4,100 m2) in area. 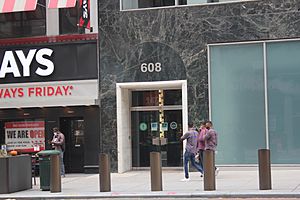 The facades at the first story and the second-level mezzanine are composed of glass curtain walls. Green marble fills the spaces between each floor. An archway surrounded with green marble is located along the 49th Street facade. A metal screen, painted bronze, is located at the second story.

Above the two lowest stories, the 49th Street facade contains a recessed "light court", which allows additional windows to be placed further inside the building. The exterior is made of two main types of marble. The horizontal panels are made of white marble, and the vertical piers are made of green marble. The third through ninth stories also contain several series of centrally-positioned vertical "ribs" that separate each of the architectural bays. Each series of ribs frames a dormer at the tenth story, above the central architectural bay on each facade. The tenth story and penthouse are sheathed in green marble, and the penthouse has white trim lines.

Ornamentation on the exterior includes aluminum mullions on the windows and at the corners. Other decorative elements include a monogram consisting of interlocked letters "G", as well as the Goelet family crest of a swan. These elements are displayed above the second story on Fifth Avenue facade. The crest and monogram hung above the original main entrance arch on Fifth Avenue, demolished in 1965, as well as the arched entryway on 49th Street.

The building's lobby was designed in a full Art Deco style, as Victor Hafner was not constrained by a need to conform the building's interior with those of nearby buildings. The lobby is reached from a doorway on the southernmost portion of the Fifth Avenue facade. Its entrance vestibule is made of dark marble. The ceiling is made of aluminum painted in a bronze color. Inlaid in the middle of the vestibule's ceiling is a depiction of the Goelet swan, surrounded by geometric patterns. Art Deco motifs are located on the ceiling and walls.

A set of three swinging silver doors leads to an S-shaped passageway, which in turn leads to the elevator lobby. The floor contains marbles in various tones, and the ceiling is also of bronze-colored aluminum. The walls of the elevator lobby are composed of light-colored marble, interspersed with darker horizontal strips. The elevator lobby contains three openings for elevators, as well as a staircase to the floors above; the elevator doors also contain intricate carvings.

All content from Kiddle encyclopedia articles (including the article images and facts) can be freely used under Attribution-ShareAlike license, unless stated otherwise. Cite this article:
608 Fifth Avenue Facts for Kids. Kiddle Encyclopedia.