6 Nimmt! / Take 6! is a card game for 2–10 players designed by Wolfgang Kramer in 1994 and published by Amigo Spiele. The French version is distributed by Gigamic. This game received the Deutscher Spiele Preis award in 1994.

The game has 104 cards, each bearing a number and one to seven bull's heads symbols that represent penalty points. A round of ten turns is played where all players place one card of their choice onto the table. The placed cards are arranged on four rows according to fixed rules. If placed onto a row that already has five cards then the player receives those five cards, which count as penalty points that are totaled up at the end of the round. Rounds are played until a player reaches 66 points, whereupon the player with the least penalty points wins. 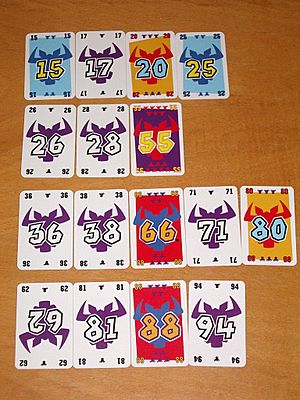 The goal is to be the player with the fewest points. To do this, the players need to avoid picking up penalty cards.

6 Nimmt! is played using a special card deck that has a variable number of small cattle heads on them. The cards are numbered 1 to 104, each giving 1, 2, 3, 5 or 7 points (i.e. cattle heads) to the person who picks it up.

In the deck there are:

Ten cards are dealt to each player.

Four uncovered cards are arranged on the table to form a vertical line.

At each turn, each player selects a card to play, and puts the card face down on the table. When all the players have selected a card, the cards are uncovered.

Starting with the lowest valued card, and continuing in increasing order, each player must put their card at the end of one of the four rows on the table, following these rules:

The cards of all the players are played following these rules, from the lowest player card to the highest one.

At the end of the turn, the players each select a new card to play; this is repeated for 10 turns until all the cards in the hand are played.

End of the game

After the 10 turns, each player counts the cattle heads on the cards gathered from the table during the round. The score of each player is collected on the paper and a new hand starts.

The game ends when a player collects a total of 66 or more cattle heads. The winner is the player who has collected the fewest cattle heads.

This variation is more strategic than the basic rules since it is possible to know which cards have been already played and which ones are available to other players.

Cards can also go to the beginning of the row

In this variation, the card currently being placed can also go to the left of an existing row of cards, following the same concepts: it has to be lower than the leftmost card in that row and it has to be closest in value to that card (example, place the 10 to the left of 11 instead of 15). It is not allowed to place a card in between two existing cards of a row. If a card could be placed both at the start of one row or at the end of another row, the closest card (in number) determines where it will go. If placing the 6th card to the left of a row, you take the whole row and leave your card as the start. This variation is implemented online at Brett Spiel Welt and makes the game more unpredictable.

Each player chooses his/ her cards

All cards are placed facing upwards on the table. Starting from a randomly selected player and continuing clockwise each player chooses a card. This continues until each player holds 10 cards. The remaining 4 cards are arranged on the table to form a vertical line. The other rules are unchanged.

This version is for children who understand bigger/smaller numbers or to teach them the concept.

Teaches kids to count and learn about bigger/smaller numbers. It is purely luck, so kids and adults are equally matched.

All content from Kiddle encyclopedia articles (including the article images and facts) can be freely used under Attribution-ShareAlike license, unless stated otherwise. Cite this article:
6 Nimmt! Facts for Kids. Kiddle Encyclopedia.