82-84 Windmill Street, Millers Point is a heritage-listed residence and former residence and office located at 82-84 Windmill Street, in the inner city Sydney suburb of Millers Point in the City of Sydney local government area of New South Wales, Australia. It is also known as the Royal College of Pathologists (former) and Terrace. It was added to the New South Wales State Heritage Register on 2 April 1999.

82-84 Windmill Street is a Georgian Revival style Victorian townhouse built c. 1860, once the home of naturalist John William Brazier, and also part of the Royal College of Physicians.

In 1971, a 20-year lease was granted by the City of Sydney for the use of premises at 82 Windmill Street to the Royal College of Pathologists of Australasia. In 1974 a lease to the College was granted by the City over 84 Windmill Street. The College renovated both buildings and use them as offices until 1984 when the College purchased Durham Hall in Surry Hills and relocated to that property. 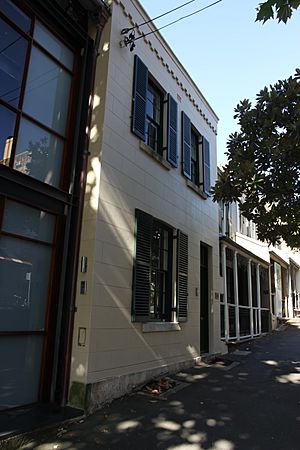 As at 23 November 2000, this Victorian Georgian townhouse was constructed c. 1860. Once the home of noted naturalist John William Brazier, it was also formerly part of the Royal College of Physicians. It is part of the Millers Point Conservation Area, an intact residential and maritime precinct. It contains residential buildings and civic spaces dating from the 1830s and is an important example of 19th century adaptation of the landscape.

All content from Kiddle encyclopedia articles (including the article images and facts) can be freely used under Attribution-ShareAlike license, unless stated otherwise. Cite this article:
82-84 Windmill Street, Millers Point Facts for Kids. Kiddle Encyclopedia.