Millers Point is one of the earliest areas of European settlement in Australia, and a focus for maritime activities. This Victorian terrace was originally one of a pair of two storey early Victorian terraces, this property has had a third storey of late Victorian character added. First tenanted by the NSW Department of Housing in 1982. 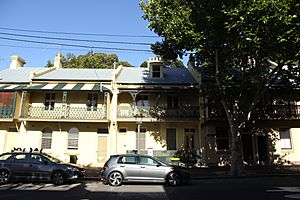 An interesting three-storey early Victorian house with cantilevered balcony over the footpath and cast iron balustrade and timber columns. Between No. 92 and No. 90 there is a passageway to the rear. This residence has five bedrooms. Storeys: Two; Construction: Painted rendered masonry, corrugated galvanised iron roof, timber verandah, cast iron columns. Style: Victorian.

As at 23 November 2000, this early Victorian terrace was one of two, however, it has a late Victorian addition of a second storey. Also, it has a cantilevered balcony and passageway through to rear of property. This is an important streetscape element.

All content from Kiddle encyclopedia articles (including the article images and facts) can be freely used under Attribution-ShareAlike license, unless stated otherwise. Cite this article:
90-92 Kent Street, Millers Point Facts for Kids. Kiddle Encyclopedia.