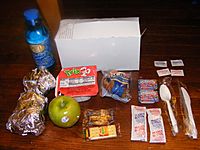 'A' ration meals may be served in dining facilities ("DFAC"), prepared in the field by the use of field kitchens, or prepared at a fixed facility and transported to field locations in containers.

'A' rations today may include the Unitized Group Ration A (UGR-A), a hybrid meal kit designed to feed a group of 50 persons for one meal. The UGR-A has several different varieties, including a tray-based heat and serve (T-rat) form, heated by hot water immersion when a field kitchen is not available, or the express form, with a self-heating module and disposable accessories. The UGR-A is used to sustain military personnel during worldwide operations that allow organized food service facilities.

The UGR-A includes perishable/frozen type entrees (A-Rations) along with commercial-type components and perishable/frozen type entrees to provide the luxury of an A-Ration meal in the field, configured into individual meal modules for ease of ordering, distribution, and preparation. The UGR-A has at least 9 months shelf life (at 80 °F or 27 °C for semi-perishable modules and at 0 °F or −18 °C for perishable modules).

All content from Kiddle encyclopedia articles (including the article images and facts) can be freely used under Attribution-ShareAlike license, unless stated otherwise. Cite this article:
A-ration Facts for Kids. Kiddle Encyclopedia.