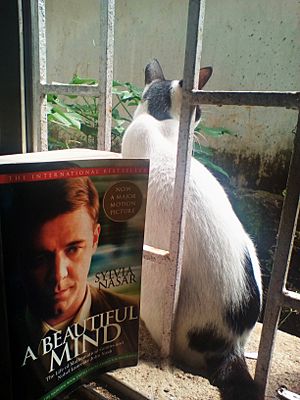 A Beautiful Mind is a 2001 biographical movie about the mathematician John Nash and his experiences of schizophrenia. It is set in Massachusetts and New Jersey. It stars Russell Crowe, Ed Harris, Jennifer Connelly, Christopher Plummer, and Paul Bettany. It was directed by Ron Howard.

The movie is based on a book by Sylvia Nasar.

All content from Kiddle encyclopedia articles (including the article images and facts) can be freely used under Attribution-ShareAlike license, unless stated otherwise. Cite this article:
A Beautiful Mind (movie) Facts for Kids. Kiddle Encyclopedia.