Kids Encyclopedia Facts
For the 2018 Disney film by the same name, see A Wrinkle in Time (2018 film).

A Wrinkle in Time is a 2003 television fantasy film directed by John Kent Harrison from a teleplay by Susan Shilliday. The film, a Canadian and U.S. production, is based on the 1962 novel of the same name by Madeleine L'Engle. It is produced by Walt Disney Television, Dimension Television, Fireworks Entertainment, and The Kerner Entertainment Company. The film stars Katie Stuart, Gregory Smith, David Dorfman, Chris Potter, Kyle Secor, Seán Cullen, Sarah-Jane Redmond, Kate Nelligan, Alison Elliot, and Alfre Woodard.

A Wrinkle in Time premiered at the Toronto Children's film Festival on April 24, 2003, where it won the Best Feature Film Award. 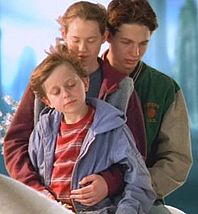 From left: David Dorfman as Charles Wallace Murry, Katie Stuart as Meg Murry and Gregory Smith as Calvin O'Keefe on the planet Uriel

Meg Murry (Katie Stuart) is having a difficult time. Her father, astrophysicist Dr. Jack Murry (Chris Potter), has mysteriously disappeared. Her youngest brother, Charles Wallace (David Dorfman), a genius, is teased and belittled and thought to be stupid because he does not talk to anyone but family. Meg does not get along with her peers, teachers, her 10-year-old twin brothers (Munro Chambers, Thomas Chambers), or even with herself.

Into this unhappy situation comes a stranger, the mysterious, weirdly dressed Mrs. Whatsit (Alfre Woodard), and her friends Mrs. Who (Alison Elliott) and Mrs. Which (Kate Nelligan). They take Meg, Charles Wallace, and their new friend Calvin O'Keefe (Gregory Smith) via "tesseract" to other planets, preparing the children for a mission to rescue Dr. Murry from the malevolent "IT" on the planet Camazotz. Along the way they ride on the back of a beautiful winged creature (the transformed Mrs. Whatsit), learn about the shadow of tangible evil known as the Black Thing, and visit the Happy Medium (Seán Cullen).

Once they reach Camazotz, however, it is up to Meg, Calvin, and Charles Wallace to face the dangers of CENTRAL Central Intelligence, aided only by each other and a pair of Mrs. Who's glasses. They do find and rescue Dr. Murry, but Charles Wallace is seduced away from his family by IT's agent, the Man with Red Eyes (Kyle Secor), and thus comes under the control of IT. Dr. Murry manages to tesser himself, Meg and Calvin, away from Camazotz, but Charles Wallace is left behind, trapped in the mind of IT. Angry with her father, Calvin and herself for leaving Charles Wallace behind, Meg is cared for by the sightless and motherly Aunt Beast (Ellen Dubin) on the planet Ixchel and argues with Mrs. Which about returning to rescue her brother. Returning alone to Camazotz, Meg must find a quality in herself—love—to free Charles Wallace, and possibly free the planet Camazotz as well.

All content from Kiddle encyclopedia articles (including the article images and facts) can be freely used under Attribution-ShareAlike license, unless stated otherwise. Cite this article:
A Wrinkle in Time (2003 film) Facts for Kids. Kiddle Encyclopedia.