Aaron Sigmond is an American author, editor and publisher with a focus on luxury heritage brands.

Sigmond moved from Los Angeles to New York City to pursue a career in magazine publishing. He created and launched the cigar lifestyle periodical Smoke magazine. Along the way he became a recognized authority on cigars, wine and spirits. Sigmond worked his way up to become Group Publisher of Profile Pursuit, focusing on custom publishing for clients such as Crunch Fitness and publisher of Radar. Among his other work in custom media was Trump Magazine, a glossy published with Donald Trump. Sigmond was most recently Editor-in-Chief of Mechanics of Style, a custom digital men's luxury lifestyle journal for Girard-Perregaux. Sigmond also served as the Group Luxury Editor for DoubleDown Media and was the launch publisher of Radar magazine. 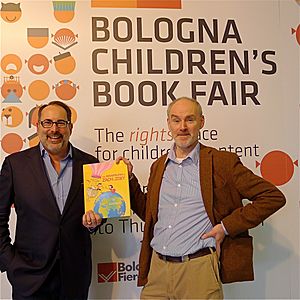 Sigmond presenting his book The Adventures of Zach & Zoey with illustrator Patrick Regout in 2014 at the Bologna Children's Book Fair.

Sigmond has written for publications including Robb Report, Worth magazine, The Big Stage from the NYSE. Sigmond is also a noted timepiece writer, having written for both Revolution and aBlogToWatch. He has published two related books: The New Face of Tradition: Young Watch Masters of Girard-Perregaux & The Art of Making Time and the forthcoming Drive Time: Watches Inspired by Automobiles, Motorcycles and Racing (Rizzoli, 2016), with a foreword by car and watch collector Jay Leno.

All content from Kiddle encyclopedia articles (including the article images and facts) can be freely used under Attribution-ShareAlike license, unless stated otherwise. Cite this article:
Aaron Sigmond Facts for Kids. Kiddle Encyclopedia.