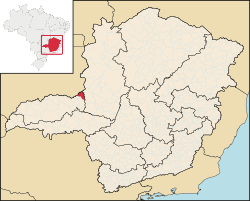 Abadia dos Dourados is a Brazilian city in the state of Minas Gerais. Its estimated that the population in 2007 was 6,556 people living in a total area of 894 km².

The city is located in the region of the Alto Paranaíba, south of the Paranaíba River and west of the Emborcação Reservoir. It is in the valley of the upper reaches of the Dourados River. Neighboring cities are: Catalão (N), Monte Carmelo (E), Coromandel (S), and Douradoquara (W).

All content from Kiddle encyclopedia articles (including the article images and facts) can be freely used under Attribution-ShareAlike license, unless stated otherwise. Cite this article:
Abadia dos Dourados Facts for Kids. Kiddle Encyclopedia.