The Abandoned Pennsylvania Turnpike is the common name of a 13-mile (21 km) stretch of the Pennsylvania Turnpike that was bypassed in 1968 when a modern stretch opened to ease traffic congestion in the tunnels. In this case, the Sideling Hill Tunnel and Rays Hill Tunnel were bypassed, as was one of the Turnpike's travel plazas. The bypass is located just east of the heavily congested Breezewood interchange for Interstate 70 (I-70) eastbound at what is now I-76 exit 161. The section of the turnpike was at one time part of the South Pennsylvania Railroad. 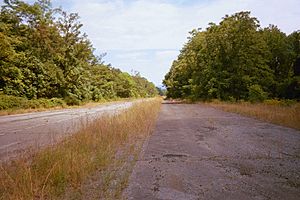 Nature is starting to reclaim parts of the original 1940s roadway.

When the Pennsylvania Turnpike opened in 1940, it was known as the "Tunnel Highway" because it traversed seven tunnels: from east to west, Blue Mountain, Kittatinny Mountain, Tuscarora Mountain, Sideling Hill, Rays Hill, Allegheny Mountain, and Laurel Hill. There was one tunnel through each mountain, and the highway was reduced to a single lane in each direction through each tunnel. These tunnels were originally built as part of the South Pennsylvania Railroad. One short tunnel was bypassed during the original construction of the Turnpike.

By the late 1950s, the turnpike was so heavily used that traffic congestion demanded expansion because bottlenecks at the two-lane tunnels on the Pennsylvania Turnpike became a major problem. Traffic jams formed at each tunnel, especially during the summer. The Pennsylvania Turnpike Commission (PTC) conducted studies on either expanding or bypassing the tunnels. In 1959, four Senators urged state officials to work with the turnpike commission to study ways to reduce the traffic jams. That year, the commission began studies aimed at resolving the traffic jams at the Laurel Hill and Allegheny Mountain tunnels; studies for the other tunnels followed. At the conclusion of the studies, the turnpike commission planned to make the entire turnpike four lanes by either adding a second tube at the tunnels or bypassing them. The new and upgraded tunnel tubes would feature white tiles, fluorescent lighting, and upgraded ventilation.

The turnpike commission announced plans to build a second bore at the Allegheny Mountain Tunnel and a four-lane bypass of the Laurel Hill Tunnel in 1960. A bypass was planned for the Laurel Hill Tunnel because traffic would be more quickly and less expensively relieved than it would by boring another tunnel. In 1962, the turnpike commission approved these two projects. That August, $21 million in bonds were sold to finance the two projects. The Laurel Hill Tunnel was bypassed using a deep cut to the north; it would feature a wide median, truck climbing lanes, and a 145-foot (44 m)-deep cut into the mountain. Groundbreaking for the new alignment took place on September 6, 1962. This bypass opened to traffic on October 30, 1964 at a cost of $7.5 million. Work on boring the second tube at Allegheny Mountain Tunnel also began on September 6, 1962. The former South Pennsylvania Railroad tunnel was considered, but was again rejected because of its poor condition. On March 15, 1965, the new tube opened to traffic, after which the original tube was closed to allow updates to be made. It reopened on August 25, 1966. The construction of the second tube at Allegheny Mountain cost $12 million. The turnpike bypass of Rays Hill and Sideling Hill tunnels opened to traffic on November 26, 1968. 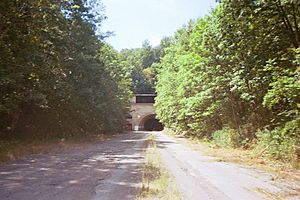 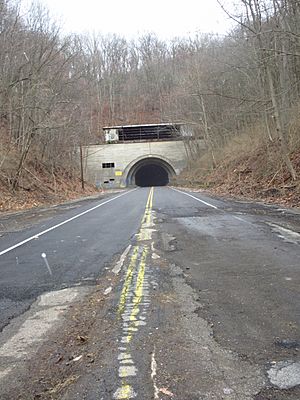 Today, the Abandoned Turnpike, as it is commonly known, is a popular tourist attraction. The PTC sold most of the property to the Southern Alleghenies Conservancy (SAC) for $1 in 2001. The property is managed by Friends of the Pike 2 Bike, a coalition of non-profit groups (including the SAC) to eventually convert the stretch into a bike trail. The property is officially closed to the public, and no motor vehicles are allowed on the property, but bicycle riders are free to use it at their own risk. The trail requires helmets and lights. Because this stretch sits on parts of the former right-of-way of the South Pennsylvania Railroad that was never completed but later formed the basis of the mainline turnpike, this makes the Pike2Bike unofficially a rail trail. The PTC still owns a stretch of about 0.25 miles (0.40 km; 1,300 ft; 400 m) on the west and 3.5 miles (5.6 km) on the east for maintenance purposes.

The tunnel's entrances have deteriorated due to vandalism, and their signboards were taken sometime between 1981 and 1999. However, tunnel structure is still sound despite not having been maintained for decades.

A business plan and feasibility study was completed by Gannett Fleming in 2005. It proposed various ideas to make the trail as accessible as possible for cyclists, hikers, inline skaters, and equestrians.

As of November 2007[update], the trail is in the process of changing ownership to Bedford County. This is in response to the Pennsylvania Department of Conservation and Natural Resources' need for a governmental body to own the trail before it can give out grants. The Friends of the Pike 2 Bike will continue to run and oversee the trail.

In the early 1970s, the emission levels of unleaded gasoline were tested in Rays Hill Tunnel. A Plymouth Satellite was used as the test vehicle. 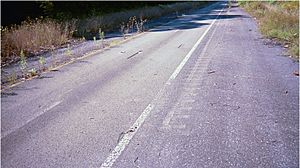 Test rumble strips from the SNAP project, just outside the western portal of the Rays Hill Tunnel

The PTC and PennDOT used the highway to train maintenance workers, as well as for testing of rumble strips.

There have also been numerous military uses for the highway; the tunnels were considered as a storage area for weapons, as was the open highway for aircraft. The military also used the highway for training soldiers for Iraq in the early 2000s, even after the highway was sold to the SAC.

In 2008 the highway was used for the filming of the Dimension Films movie The Road starring Viggo Mortensen. The studios mildly restored the exterior of the eastern portal of the Ray's Hill Tunnel when it was used for filming. 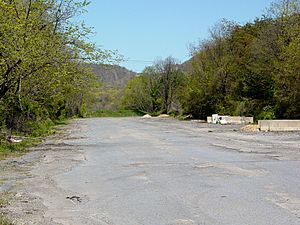 In 2005, the PTC restricted access to the abandoned turnpike by demolishing an overpass over U.S. Route 30 (US 30) in Breezewood and an overpass on Pump Station Road near the site of the old Cove Valley Travel Plaza. The demolition of the overpasses removed the liability and expense of repairing the aging bridges, marked the property lines between the public and the PTC-owned sections of the property, and prevented motorized vehicles from easily entering the abandoned turnpike.

The original plans for the removal included an access road, but somewhere along the way, it was removed and not known to Pike 2 Bike officials until it was too late. As of 2012[update], the Friends of the Pike 2 Bike are seeking to obtain grants that will allow the building of an access road and to rebuild on it the last remaining original toll booth, which was obtained in 2006. The toll booth will be used to collect a parking donation that will be used to pay for maintenance. An access road was built in the late 2000s on the PTC-owned side of the former Pump Station Road overpass, making the 3.5-mile (5.6 km) section still owned by the PTC a de facto access road to the active turnpike in itself; however, like other access roads along the turnpike, it is off-limits to the public and is only used by the PTC or Pennsylvania State Police. 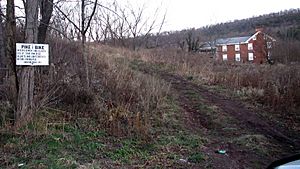 There are three access points to the public section of the abandoned highway: 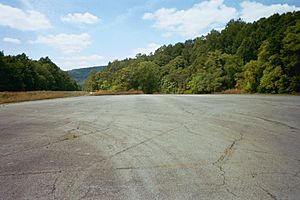 Site of the former Cove Valley Travel Plaza, the Sideling Hill Tunnel is about a half mile to the west

The Abandoned Turnpike is perhaps the best-known of tunnel bypasses on toll roads. Among the other bypassed tunnels:

All content from Kiddle encyclopedia articles (including the article images and facts) can be freely used under Attribution-ShareAlike license, unless stated otherwise. Cite this article:
Abandoned Pennsylvania Turnpike Facts for Kids. Kiddle Encyclopedia.