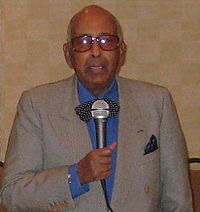 Abdirahman Jama Barre (Somali: Cabdiraxmaan Jaamac Barre, Arabic: عبد الرحمن جامع بري‎‎) (1937 – 15 August 2017) was a Somali politician. He twice served as the Minister of Foreign Affairs of the Somali Democratic Republic, and later as the Minister of Finance. He was also the 1st Deputy Prime Minister of Somalia. He served all three positions at the same time from 1987 through 1991.

Barre was born in Luuq, Italian Somaliland. He studied at the University of Padua. Barra died in San Diego, California on 15 August 2017 at the age of 79.

All content from Kiddle encyclopedia articles (including the article images and facts) can be freely used under Attribution-ShareAlike license, unless stated otherwise. Cite this article:
Abdirahman Jama Barre Facts for Kids. Kiddle Encyclopedia.