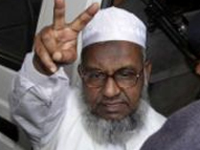 Abdul Quader Molla (Bengali: আব্দুল কাদের মোল্লা) (born 14 August, 1948- 12 December 2013) was a politician in Bangladesh. He was convicted of war crimes committed during the 1971 liberation war of Bangladesh. He is the assistant secretary-general of the Jamaat-e-Islami, the largest Islamist party in the country.

He is the former executive editor of The Daily Sangram. He stood twice unsuccessfully for parliament in 1986 and 1996. He was contesting the seat Faridpur-4 for Jamaat-e-Islami.

All content from Kiddle encyclopedia articles (including the article images and facts) can be freely used under Attribution-ShareAlike license, unless stated otherwise. Cite this article:
Abdul Quader Molla Facts for Kids. Kiddle Encyclopedia.